Mass protests continued for the third night in a row against Alexander Lukashenko’s landslide victory that gave him his sixth presidential mandate in what thousands of his opponents consider a rigged election. 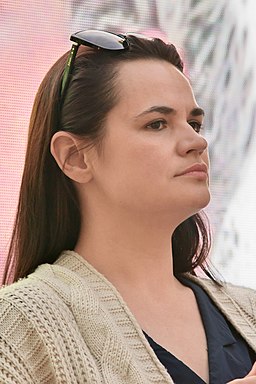 Demonstrators took to the streets despite a massive police crackdown the nights before, internet and cellular blackout in the country and calls for calm by Lukasenko’s main election challenger who was allegedly forced to leave the country or left to avoid detention.

Official updated results from the August 9 election, relayed by the state press agency Belta, showed that Lukashenko won 80 percent of the vote, with his closest opponent, surprise challenger Svetlana Tikhanouskaya, having gathered 10 percent.

Lukashenko's lasting grip — he has been in power since 1994 — earned Belarus the title “the last dictatorship in Europe.” His authoritative rule, however, faced an increasing discontent over his handling of the COVID-19 pandemic, the deteriorating economy and efforts to silence critics.

Svetlana Tikhanouskaya, 38, was an unexpected presidential candidate. This former English teacher now homemaker entered the run two months ago in place of her husband, opposition blogger Sergei Tikhanovsky, after he got jailed. Her rallies have gathered crowds unseen by the Belarusian opposition.

“I will believe my own eyes—the majority was for us”, Tikhanouskaya reacted to the results on Monday, according to The Guardian.

This year’s election in Belarus had little independent observers, which further raises doubts about the accuracy of the results.

The Organization for Security and Cooperation in Europe (OSCE), which monitors elections in all its participating states upon official invitation, had not been invited in time by the Belarusian authorities.

Political analyst and author Mark Galeotti has no doubt that Tikhanouskaya would have won in a fair election.

“Of course, the results are completely bogus,” he told OCCRP. “Lukashenko had two options: falsify the results for a realistic narrow margin or a ridiculously high one as a demonstration of strength,” he explained.

“By choosing the second option, he is trying to convince everybody who is against his regime that they are alone,” Galeotti said.

Reports say that Tikhanouskaya later left for neighboring Lithuania. It’s not clear if she was forced out by Belarusian authorities or if she fled to avoid detention. She appeared in a strange video on Tuesday, asking her supporters to end the protests.

“The people of Belarus have made their choice ... I call on you to exercise your better judgment and respect the law. I don’t want bloodshed or violence. I ask you not to confront the police or go out into the public squares, so as not to endanger your lives,” she read in front of the camera in what seemed to be an office.

Violent clashes across the country for a second night

Footage posted on social media over the first two nights showed violent police intervention after results were announced in the capital Minsk, where protesters had erected barricades.

Amnesty International reported that shock grenades and rubber bullets were used by anti-riot forces. Belarusian Human Rights organization Viasna claimed that dozens were injured and that at least one person died when run over by a police truck. They added that at least 300 people were detained across the country.

The press department of the Belarusian Investigative Committee said on Monday that law enforcement members were also injured and that it had opened a criminal case over the “riots”.

The Committee implied that the clashes were the work of a few protesters, many under the influence of alcohol. In Belarus, people convicted of participating in a riot can get up to 8 to15 years in prison.

“It’s a battle of wills between a dying regime which will try to repress and intimidate its opponents no matter what, and protesters determined to hold their grounds,” Galeotti explained.

“The government will likely impose martial law — they are acting like there was martial law already— or at least some kind of curfew in Minsk,” the analyst added.

Many Belarusian websites, including the ones of the government and main media, have gone offline since the evening of August 9.

The European Union and the United States condemned the disproportionate state violence against peaceful protesters and called for the immediate release of all detained, but announced no sanctions against Belarus.

“The United States is deeply concerned about the conduct of the August 9 presidential election in Belarus, which was not free and fair,” said U.S. Secretary of State Mike Pompeo.

“It is essential that the Electoral Commission publishes the results reflecting the choice of the Belarusian people… Only upholding human rights, democracy, and free and fair elections will guarantee stability and sovereignty in Belarus,” EU High Representative Joseph Borrell and Neighbourhood and Enlargement Commissioner Olivér Várhelyi declared in a joint statement.

Galeotti believes that only Russia’s intervention could really make a difference. According to him, “Putin absolutely doesn’t want to get involved, but he cannot afford to lose Belarus to the West. He waits in hope the regime will solve this itself.”

Although Lukashenko stays in power, the opposition has achieved a major breakthrough.

“He might survive, but people will remember and realize it’s the regime of a minority. The longer and the more lethal the protests go, the less support Lukashensko will have from the members of his regime and from law enforcement,” predicted Galeotti.

“It’s a matter of time,” he concluded.