US Offers $5 Million for Help in Arresting Venezuelan Chief Justice

The U.S. is offering US$5 million for information that would lead to the arrest and conviction of the current Chief Justice of the Venezuelan Supreme Court, Maikel Jose Moreno Perez, whom Washington has accused of corruption and money laundering. 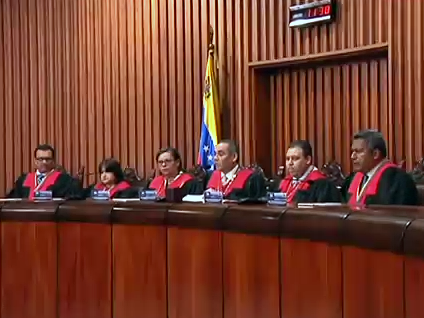 Moreno Perez has sat on the Venezuelan Supreme Court since 2014. (Source: Wikimedia Commons)The United States Immigration and Customs Enforcement Agency announced the reward on Tuesday after in March the Southern District of Florida charged Moreno Perez, 54, in a federal complaint with taking bribes worth tens of millions of dollars to illegally fix dozens of civil and criminal cases in Venezuela and then launder the money.

Moreno Perez, 54, is the current Supreme Court Chief Justice under the rule of Venezuelan President Nicolas Maduro, whom the U.S. views as illegitimate since the country’s disputed 2018 elections.

“Moreno Perez received the bribes in exchange for judicial actions, such as directing lower-court judges to release specific defendants or to dismiss particular cases, in over 20 judicial proceedings,” said U.S. Secretary of State Mike Pompeo in a statement.

Perez has been a longstanding figure in the Venezuelan judicial system. Appointed by the administration of former Venezuelan President Hugo Chavez in the early 2000’s, he made a name for himself prosecuting opponents of the Chavez regime in the wake of the 2002 attempted coup d'etat against his government. Those included Ivan Simonovis, who was security chief of Caracas during the coup.

By 2014 he had risen to the country’s Supreme Court and in 2015 was sworn in as chief justice.

The Venezuelan government reacted strongly to the posting of the bounty.

“The Government of the Bolivarian Republic of Venezuela once again rejects the illegal and coercive actions of the government of Donald Trump against the Venezuelan people and its constitutional institution,” said a statement from the Venezuelan Ministry of Foreign Affairs.

The statement accused Washington of “making false accusations and offering a reward in the style of the cowboys of the wild and far West.”

The State Department did produce a Spanish language bounty poster for Moreno Perez, which some may find reminiscent of the Wild West era of American history.

“The people of the United States deserve a government that stand out for respecting international law, not for violating it. A government that builds bridges by its capacity for dialogue, not by its wastefulness in military spending,” said the Foreign Ministry. “They deserve institutions that are dedicated to solving the serious problems of their society, including a justice system that is dedicated, for example, to determining the truth and the responsibilities of politicians and businessmen involved in the aberrations of the scandalous Epstein case.”