Disappearing Ink as New Tool for Low-Level Graft in Russia

A Moscow city lawmaker said she discovered how contracts are being rigged by officials who use disappearing ink to adjust prices of infrastructure and other works and line their pockets with the difference. 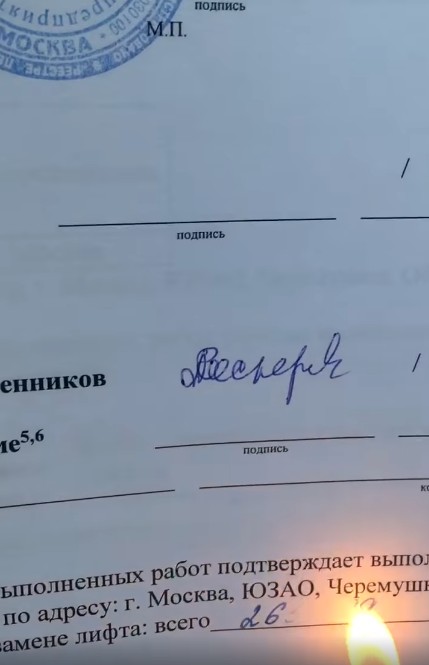 Ink disappearing under flame of a lighter. (Photo: Facebook screenshot)Yelena Selkova, a councilor of Moscow's Cheryomushki District, posted a video on her Facebook page, demonstrating how this is done.

When filling out the blanks on a printed contract, the perpetrators use ink that disappears when exposed to heat to write down the price for a service. Once all sides sign the contract, the price can be removed by exposing the paper to a cigarette lighter which makes the sum disappear and the signed contract is ready for a higher sum to be written and submitted to authorities.

Selkova demonstrated part of the process on an elevator replacement contract in a Moscow building.

“Let’s check the price,” she can be heard saying in the video while putting the flame close to the sum on the contract. “It’s gone,” she comments while the numbers are vanishing from the paper.

The sum of 2.6 million Russian rubles (US$36,433) disappeared, leaving an empty line, possibly for a new sum to be put in and presented to the authorities. More contracts with “adjustable” sums means that more money will go to pockets of the corrupt officials, according to Selkova.

The elevator contract with disappearing ink was not the first such document Selkova encountered, according to Moskovskaya Gazeta.

In an interview with the news outlet she also said she will report the case to prosecutors, but added that probably no one would face responsibility for the “now you see me, now you don’t” criminal act.