Ikea’s iconic Terje and Ingolf chairs are made of wood that has been illegally logged in one of the last large forests in Europe, a report released by UK non-profit Earthsight claims. 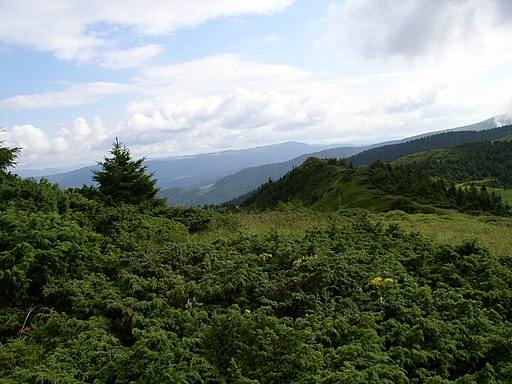 Illegal logging in the Carpathian mountains is destroying one of the last strongholds for endangered European carnivores such as lynx and bear. (Photo: Alex Zelenko, GNU)To produce the report titled “Flatpacked Forests,” Earthsight, which claims to be trying to expose environmental and social crimes?, traced logs and wood chips from the Ukranian Carpathians to the shelves of the popular Scandinavian homeware giant.

Ikea advertises that its furniture possess the Forest Stewardship Council (FSC) label, a green label for wood, but Earthsight found that by relying solely on flawed FSC audits, the chain is not doing enough to ensure the logs it uses are really legal.

Using the pretext of sanitary felling - cutting sick or dead trees - was a common ruse in Ukraine to hide illegal logging activities, the organisation said.

The state-owned forestry enterprise of Velyky Bychkiv, VGSM, one of the largest Ukrainian Ikea suppliers, logged at least seven different football-field-size sites under the pretext of sanitary felling, according to the report.

The company told Earthsight that it was because of a big windthrow that hit the forest the year before. However, Earthsight noted, that should not have prevented them from conducting a mandatory environmental impact assessment.

VGSM is one of the largest timber processing companies in Ukraine and produces wooden boards and chairs for Ikea. It is also selling spare parts to another Ikea furniture supplier, Romanian firm Plimob. The report estimated that Ikea sells up to two million chairs containing wood from VGSM each year.

OCCRP Ukrainian member center Slidstvo found that the CEO of VGSM, Iryna Matsepura, was also a member of the regional council since 2015.

They further discovered that VGSM was implicated in several criminal probes. The Uzhhorod city court found one timber trader working with VGSM guilty of evading nearly US$100.000 in taxes on bulk deals.

A little further north, in the region of Ivano-Frankivsk, authorities are investigating the decision of another state-owned forestry company to deliver 126 licenses to log in the Hutzulshchyna National Park and to grant VGSM the right to export some of this wood.

The State Agency of Forest Resources (SAFR) is responsible for both managing state-owned forestry companies and ensuring that forests acting as essential habitats for species of bears, bisons, lynxes and wolves are preserved.

The director of the Hutsulschyna National Park claimed to Earthsight that forestry officials had threatened the “lives and health” of park employees over keeping the secret on illegal logging.

Earthsight linked the environmental violations practiced by Ukranian companies to the very high pressure of big actors like Ikea to keep their prices as cheap as possible.

According to the non-profit, Ikea is the biggest wood consumer in the world. In 2019, the company used 21 million cubic metres.

“The money [Ikea] manages is an amount far greater than the budget of Ukraine. When [they] offer a [price], you either agree or you don’t,” VGSM ‘s CEO Iryna Matsepura told Earthsight.

Ikea provided OCCRP with a general statement, saying that they take reports and findings by NGOs “very seriously” and they “have immediately begun investigating the allegations.”

“IKEA does not accept illegally logged wood in our products... When we encounter any information that suggests wood which does not meet our requirements has entered, or is at risk of entering our supply chain, we take immediate action.”

“This includes the termination of suppliers' contracts,” the statement added.