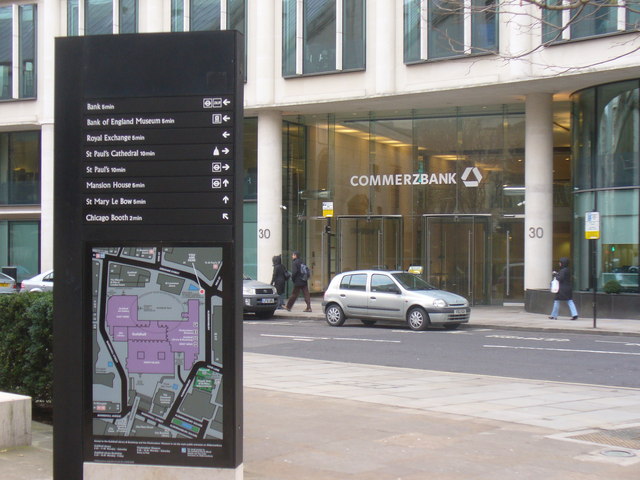 Commerzbank's UK branch in London. (Photo: Colin Smith (cc-by-sa/2.0))“Commerzbank London was aware of these weaknesses and failed to take reasonable and effective steps to fix them despite the FCA raising specific concerns about them in 2012, 2015 and 2017,” the financial watchdog said in a statement on Wednesday.

In 2015 alone, Commerzbank London identified that 40 high-risk countries were missing from its transaction monitoring software, and that 1,110 high-risk clients had not been added, according to the statement.

The FCA also said that these weaknesses persisted even during a period in which the authority was publishing guidance on steps firms should take to reduce the risk of financial crime, in addition to pursuing  enforcement action against a number of firms over failure to implement AML controls.

In its 50-page document the FCA stressed that Commerzbank, Germany’s second-largest lender, did not “conduct timely periodic due diligence on its clients, which resulted in a significant number of existing clients not being subject to timely know-your-client checks.”

At the same time, the bank failed to fix weaknesses in an automated tool for monitoring transactions for money-laundering risks, despite FCA warnings.

“Commerzbank London’s failings over several years created a significant risk that financial and other crime might be undetected,” FCA Executive Director of Enforcement and Market Oversight, Mark Steward, said.

He added that companies should recognize that AML controls are “vitally important to the integrity of the UK financial system.”

The original fine was even higher, totaling 54 million pounds ($67.7 million), but the bank agreed to resolve the matter at an early stage of the investigation and therefore qualified for a 30% discount, according to the FCA.

The watchdog also said that Commerzbank London has undertaken significant remediation measures to bring its AML controls into compliance, and that it has also conducted an “extensive look-back exercise to identify suspicious transactions during the period in question.”

The bank has further introduced new business restrictions, according to which it will temporarily stop taking new high-risk customers and suspend “new trade finance business activities.”

The sum Commerzbank London has to pay is modest in comparison with what the US Commerzbank’s branch had to pay more than five years ago.

In March 2015 the bank agreed to pay $1.45 billion to US authorities to resolve allegations that it had knowingly moved money through the US financial system on behalf of black-listed entities, including Iran, Sudan and other countries under US sanctions.

Back then, the US Commerzbank branch was accused of engaging “in criminal conduct using numerous schemes designed to conceal the true nature of the illicit transactions from US regulators.”