A Pakistani court cancelled a multi-million-dollar contract for the implementation of a tobacco track and trace system after two bidders complained that the winner was granted preferential treatment. 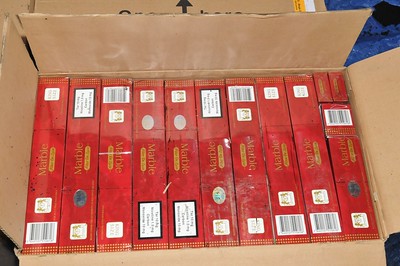 Cigarettes packages seized at customs. (Photo: HM Revenue and custom, CC BY 2.0)The deal was the subject of an OCCRP investigation called “Without A Trace: Pakistan’s Big Tobacco Problem.”

The Islamabad High Court found unfairness in the process of granting the contract to the National Radio & Telecommunication Corporation (NRTC) and instructed a new bidding process.

Philip Morris and British American Tobacco have been under-declaring their production for years, costing Pakistan up to US$448 million annually in lost taxes. They have also been complicit in Pakistan’s roaring illicit trade. A working track and trace system would put a stop to that.

Pakistan has a high prevalence of tobacco use, with an estimated 24 millions smokers. Authorities have been pressured by the International Monetary Fund to increase control on the illegal tobacco trade, which could account for between 9 and 44% of the cigarettes bought in the country.

The country therefore issued a tender for the implementation of a “Track and Trace” system under which “each cigarette packet will have a code from which it would be determined whether or not sales tax on the product has been paid,” court documents say.

A bid “ridiculously low,” that should have invalidated the NRTC candidacy, noted Judge Miangul Hassan Aurangzeb. Instead, it went unnoticed until the NRTC offered to correct their mistake after the deliberations had already started.

Although according to the rules the contract should be awarded to the next lowest bidder in case of error, the licencing committee allowed NRTC to amend its bid before granting them the contract.

The second lowest bidder and one of the plaintiffs, National Institutional Facilitation Technologies (NIFT) was offering a price of 868 rupees ($5,40) per 1,000 stamps.

The court also found other anomalies in the tender process, such as the sudden turnaround of the grievance committee on the complaints regarding NRTC’s bid amendment. They turned down the complaints in a second decision.

“If modifications in financial bids are allowed after the results of the bidding were made known … it would afford a pretext for unscrupulous bidders to prey on the public,” the judge stated in his decision.

In Pakistan’s Big Tobacco Problem, OCCRP reported that the licensing committee made a similar turnaround when deciding that the contract would be awarded to the lowest bidder meeting the requirements, while price previously accounted for only 20% of the score among other technical criterias.

OCCRP revealed that a week before the new awarding terms, representatives of tobacco companies met the chairman of Pakistan’s tax authority.

The unsuccessful bidders have criticized the NRTC’s technical legitimacy for its choice of a non-open source software that has been excluded from tobacco tracking systems by the European Union.