A ruling party MP in Ukraine has tried to illegally obtain a Romanian passport via a company that facilitates ‘gray scheme’ EU citizenship applications, according to Slidstvo, OCCRP’s Ukrainian member centre. 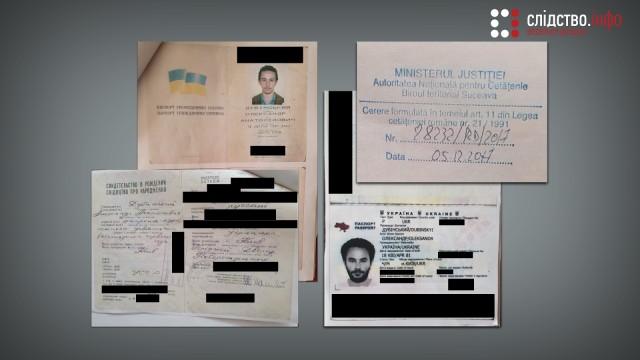 Dubinsky's citizenship documents (Photo: Slidstvo)Reporters have obtained documents revealing how Oleksandr Dubinsky filed through an intermediary a request for citizenship with the Romanian Ministry of Justice - despite dual citizenship being illegal in the Ukraine.

Dubinsky’s bid was confirmed by a Romanian lawyer who, according to Slidstvo’s sources, helped the MP submit his request.

The politician, a member of the Servant of the People party, told reporters he does not currently possess Romanian citizenship, but declined to answer further questions about the documents.

Non-citizens of Ukraine cannot hold political positions, and Romanian citizenship would therefore provide grounds to remove Dubinsky from his post as MP.

Slidstvo’s journalists conducted an undercover interview with a company that provides assistance in obtaining EU citizenship under a simplified scheme.

Company officials told the reporters that, for a fee, they would ‘find’ fictitious relatives in Romania - an EU member - to cement their applications for Romanian citizenship, as well as smooth things over with government officials so as to avoid unnecessary scrutiny.

They assured the journalists that their scheme was safe and effective, guaranteeing them a Romanian passport, no questions asked, for just under 6,000 euros (US$6,500).

Romania’s citizenship application system has itself been under investigation by the country’s National Anti-Corruption Directorate since the beginning of this year. Investigators are currently checking applications submitted between 2017 and 2019 - the same period in which Dubinsky submitted his request.