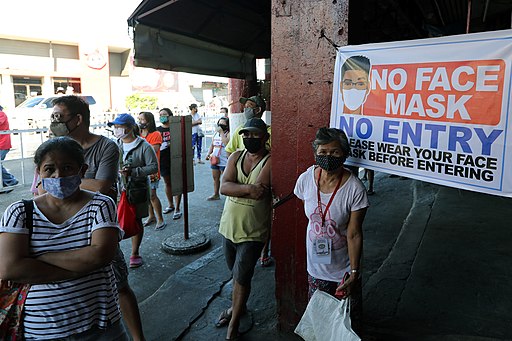 Filipinos waiting in queue at the entrance of a public market. (Photo: Philippine News Agency). The Department of Interior of the Philippines said on Tuesday it asked the police and the National Bureau of Investigation, the country’s anti-corruption unit, to “prioritize the investigation of graft and corruption cases against local officials".

The announcement was made after a municipal official was caught in a video, telling aid recipients of a town near the capital Manilla that they would only receive half of the aid, while the other half of the money would be redistributed to those not listed for state help.

Authorities said they arrested the official on May 2 for allegedly keeping that other half for himself.

Complaints had reportedly emerged of low-income households not having received emergency subsidies despite government promises. Between US$100 and $150 in cash were to be distributed to each of the around 23 million poor families living in areas under enhanced community quarantine.

The Department of Interior declared that such incidents will especially not be tolerated during the COVID-19 crisis, and that corrupt officials will be sanctioned.

“They should have no place in the government …they are carriers of a malignant virus that destroys the trust the people gave to them,” said the Secretary of Interior. However, he assured that those accused will receive due process.

The police said it would appoint additional investigators to gather evidence against corrupt local executives. A hotline was also set up for the public to report those involved in the diversion of the emergency cash aid, and President Duterte offered a 600$ reward to those blowing the whistle.