Russia: Third Infected Doctor Falls Out of the Window

A doctor fell out of a hospital window in Russia after he complained that he was forced to work although he was positive for coronavirus, the Moscow Times reported Monday, noting he was the third to fall in the past two weeks. 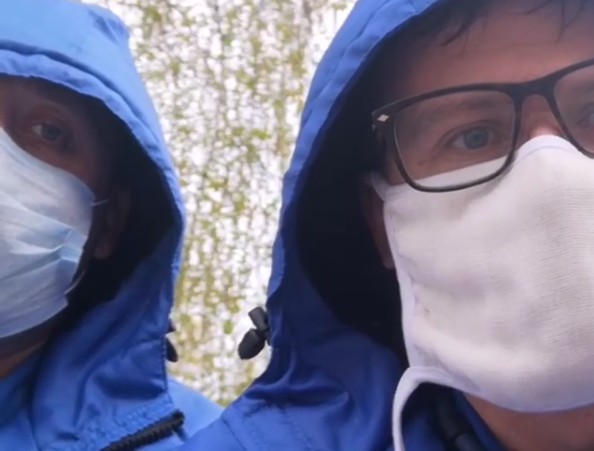 Doctors Alexander Shulepov (L), who attempted suicide, and Alexander Kosyakin (R), who filmed a video complaining about poor conditions in their hospital in Voronezh. (Photo: screenshot from Instagram)Doctor Alexander Shulepov has been in coma after he fell from the second floor of a rural hospital in the western Russian city of Voronezh, where he was allegedly being treated for COVID-19.

The 37-year-old is in critical condition, suffering from a skull fracture, the local news outlet Vesti Voronezh reported.

Together with his colleague, Alexander Kosyakin, Shulepov filmed a video about two weeks ago, complaining that the chief doctor of the Novaya Usman village hospital had forced him to work although he knew Shulepov tested positive for coronavirus.

After local medical authorities accused the two of spreading lies and fake news, Shulepov filmed a new video just a couple of days later, denying his claims from the previous video and calling them an “emotional” reaction.

His colleague Alexander Kosyakin, according to the report, has been facing criminal charges for “fake news” spreading, and could face, if sentenced, up to five years behind bars.

Vesti Voronezh reported that the Voronezh region has confirmed more than 600 coronavirus positive cases, including at least 41 doctors and patients in the largest local hospital.

The first doctor who fell out of the window was Yelena Nepomnyashchaya, 47, who plunged on April 25 from the fifth floor of the Krasnoyarsk Regional Hospital for War Veterans which she was running.

Local media speculated that she committed suicide soon after she had a conference call with the Krasnoyarsk’s health authorities who told her that her hospital would become a COVID-19 center.

Dr. Nepomnyashchaya was reportedly opposing such a decision due to serious shortages of protection equipment and unpreparedness of the hospital staff, but was unable to prevent the authorities’ decree.

About the same time, Russian Federal Health authorities confirmed that doctor Natalia Lebedeva, the chief EMS (Emergency Medical Services) officer at a cosmonaut training center near Moscow, jumped from a window of a hospital room after being tested positive to COVID-19. They described her death on April 24 as a “tragic accident.”

Moscow Komsomolets media outlet cited some reports saying that Dr. Lebedeva decided to take her life after some of her colleagues accused her of allowing coronavirus to spread among the cosmonaut training center’s medical workers by not taking sufficient measures to ensure the safety of her colleagues.

The Russian medical workers, fighting with the pandemic like most of their colleagues all over the world, have launched their Facebook page to exchange experiences, but also to share the painful and tragic side of their work.

They have also started a list of Russian and Belarus medical workers who have died while fighting COVID-19. The Memory list totals 101 so far, including the name of Dr. Lebedeva as the 53rd victim.