An international law firm has decried allegations from a Jordanian businessman that its employees subjected him to treatment amounting to torture to obtain a false confession amid a fraud investigation in the United Arab Emirates. 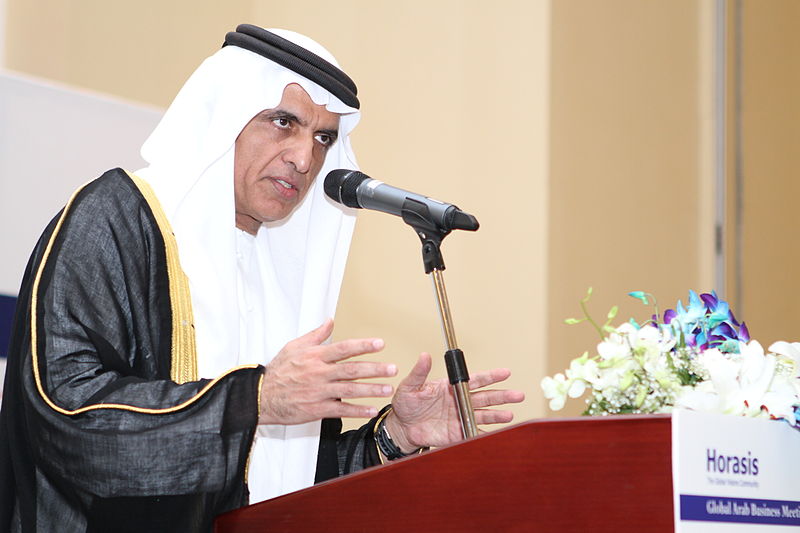 Sheik Saud Bin Saqr Al Qasimi, ruler of Ras al Khamah, hired Dechert in 2014 to investigate claims of fraud at the country’s state-run investment authority (Photo: Richter Frank-Jurgen, CC BY-SA 3.0)“The allegations against the firm and its personnel are completely without foundation and we shall be vigorously defending ourselves against them,” a spokesperson for Dechert told OCCRP on Tuesday, regarding claims of wrongdoing made by Karam Salah Al Din Awni Al Sadeq.

The Dubai-born Jordanian businessman is suing Dechert for damages relating to “physical, emotional, psychological, moral and financial harm” arising from his treatment at the hands of firm’s head of investigations, Neil Gerrard, along with partner Caroline Black and former partner David Hughes, according to a document filed last Monday with the High Court of Justice of England and Wales.

The lawsuit relates to the firm’s probe into fraudulent activity at Ras Al Khaimah Investment Authority (RAKIA), a state-owned investment program in the UAE where Al Sadeq was formerly employed as a legal advisor.

Sheik Saud bin Saqr Al Qasimi, ruler of Ras Al Khaimah, one of the seven Emirates, hired Dechert in 2014 to investigate claims of fraud against Dr Khater Masaad, former CEO of RAKIA, and Al Sadeq, along with several other alleged co-conspirators.

Al Sadeq alleges that he was returning to his home in Dubai with his wife in September that year when their car was stopped by government officials, who then bundled him into a vehicle and threatened his wife as she screamed for help.

Between then and April 2016, he claims to have been kept in solitary confinement for more than 560 days.

The document adds that Al Sadeq was repeatedly denied access to medical treatment for conditions caused by his detention, including constipation, back pain and skin problems caused by lack of sun.

“After around 13 months in detention the skin on his legs began to rot,” it reads.

During that time, Al Sadeq claims he was interviewed by Gerrard, Black and Hughes, and that Gerrard threatened to have his wife arrested if he did not cooperate by giving false evidence.

Al Sadeq, who was sentenced to 11 years in 2015 for defrauding RAKIA, is presently demanding US$20 million in damages while incarcerated at a prison in Ras Al Khamah.

His is not the first claim of wrongdoing levelled against the firm and its head of investigations.

Dechert and Gerrard currently stand at the centre of a whirlwind of suits and countersuits concerning the firm’s engagement with Kazakhstan-based Eurasian Natural Resources Corporation (ENRC), as well as a subsequent investigation into the corporation’s activities in Central Africa by the UK Serious Fraud Office (SFO).

First ENRC sued Dechert and Gerrard in 2018, claiming that the lawyer had previously leaked confidential information to The Times, possibly to boost the firm’s fees, as a subsequent article by the British newspaper may have prompted the SFO to investigate the Kazahk mining company, according to The Law Society Gazette.

The leaked information concerned alleged bribes paid by ENRC in 2009 to secure lucrative mining contacts in the Democratic Republic of Congo, as reported by the organisation Rights and Accountability in Development (RAID). The NGO claims that the alleged corruption left 700 miners out of work, and had a further negative impact on the livelihood of at least 32,000 residents of Kolwezi in the south of the country. That probe is still ongoing, according to the SFO’s website.

Then, in 2019, ENRC’s claims against Dechert and Gerrard formed the basis of a US$93 million lawsuit against the SFO, in which the corporation alleged that the agency had engaged in abuse of process in colluding with Gerrard ahead of its investigation into the company’s activities in Central Africa, according to a Bloomberg report.

But Gerrard and his wife shot back in September with a civil claim, alleging that ENRC had engaged in harassment, trespassing and misuse of private data by hiring investigations outfit Diligence International to spy on them during a holiday on a Carribean island earlier that year.