Many countries have introduced fines, even jail terms for those who violate lockdowns and curfews in a bid to contain the coronavirus pandemic. But Chechnya’s leader has suggested a far more radical measure: Execute anyone who breaks an isolation order and spreads the disease. 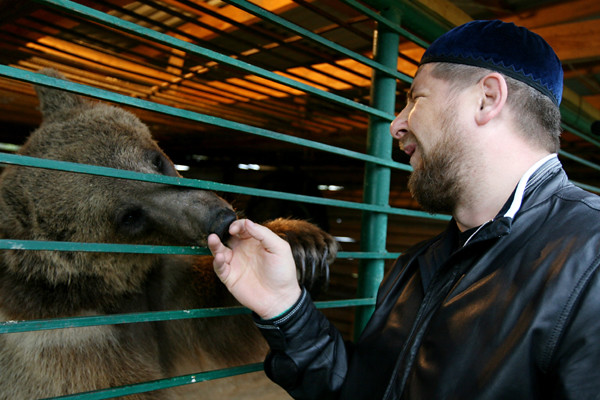 Ramzan Kadyrov petting a bear in his private zoo at his presidential residence in Gudermes. (Photo: Nika (CC BY-NC 2.0))Ramzan Kadyrov, the leader of the Russian Chechen Republic, said anyone who has been ordered to stay in quarantine but “breaches that order and infects other people, should be punished with death!” Chechen news outlet Kavkaz Uzel reported.

“If you ask me, anyone who creates this problem for himself should be killed,” it quotes Kadyrov as saying after a government meeting held on Tuesday, when the first three COVID-19 cases were reported in Chechnya.

“Not only does he get sick, but he also infects his family, his sisters, brothers, neighbors.”

Kavkaz Uzel reported the disease was imported from Turkey and Saudi Arabia, where one of the infected had recently visited on the Muslim pilgrimage to Mecca. After his return he didn’t comply with the quarantine order.

Kadyrov also said people who spread fake news about the coronavirus should be punished with “community service.”

Earlier this month, before the first cases occurred in his state, he told BBC Russia people should protect themselves by improving their immune system, drinking honey lemonade and eating lots of garlic to purify blood.

Chechnya has also taken more mainstream measures to contain the pandemic, including  closing restaurants, cafes, and other “crowded public places” in the Russian republic.

The number of confirmed cases in Russia has spiked to 1,036 in recent days, though experts say the true total is likely much higher.

There has been a moratorium on the death penalty in Russia since 1999 and no one has been officially executed there since 1996, according to the International Federation for Human Rights.