Although authorities in Skopje announced that citizens of North Macedonia being repatriated from Romania and Bulgaria will have to be quarantined for two weeks in special facilities, only a group of Roma ended up in army barracks while everybody else was allowed to go home. 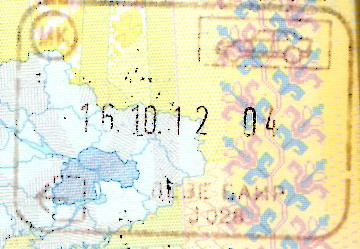 A stamp from the Deve Bair border crossing (Source: Wikimedia Commons)The country’s Minister of Health, Venko Filipce, and Foreign Affairs Minister, Nikola Dimitrov, told reporters last week that some 200 citizens would be arriving through the Deve Bair border crossing with Bulgaria, some 100 kilometers northeast of Skopje, and immediately isolated as part of the country’s measures designed to prevent coronavirus from spreading.

However, when reporters from OCCRP partner Investigative Reporting Lab Macedonia, IRLM, arrived at the border, they saw only a trickle of people, mostly students, seeping through the checkpoint. They were allowed to join their families at home after signing a statement promising they would self-quarantine for the next 14 days.

However, nine members of a Roma orchestra were put in a van and taken to the barracks.

“Of those two hundred people, only we are here,” one of the musicians told reporters. “It’s all a lie.”

“They picked us and they brought us here,” one of them said. “It’s only us and the army here. Why can’t we go home in quarantine like everybody else?”

Their accomodation was nothing more than a cramped room with spartan bunk beds that have ripped and soiled linens, as seen in a video released by Televizija 24.

The Helsinki Committee for Human Rights expressed concern over the conditions at the army barracks and reminded that according to the country’s constitution “restriction of freedoms and rights cannot be discriminatory on the grounds of sex, race, color, language, religion, national or social origin, property or social status.”

In response to the public outcry following the Televizija 24 video, authorities moved the orchestra to a more modern facility in Demir Kapija, some 100 kilometers southeast of the capital Skopje.

Upon arrival, the musicians uploaded their own video to YouTube, showing the improved conditions and thanking the NGOs and Roma rights groups which had aided them.

Minister Filipce initially said that the Roma musicians were only the first of the 200 to arrive but more than 300 people have entered the country through the same border crossing until Friday and none joined the musicians in the group quarantine, according to data from the Macedonian Information Agency reported by Telma.

“The fact that all Macedonian citizens who left the country and returned back in the last few days were placed in home isolation except for nine citizens, all of Roma ethnicity … opens up the question of a possible discriminatory treatment towards these persons,” said Senada Sali, a Lawyer at the European Roma Rights Centre.

Ultimately, on Saturday, after spending four nights quarantined in state facilities, the band members were tested and released after their tests came back negative.

However, North Macedonia’s health ministry has still not made clear why the Roma were initially quarantined without screening while others were sent directly home.