Slovaks elected an anti-corruption party on Saturday following a two-years-long political turmoil that erupted after the murder of investigative journalist Ján Kuciak which exposed the connections between the ruling Smer party and businessmen involved in fraud and tax evasion. 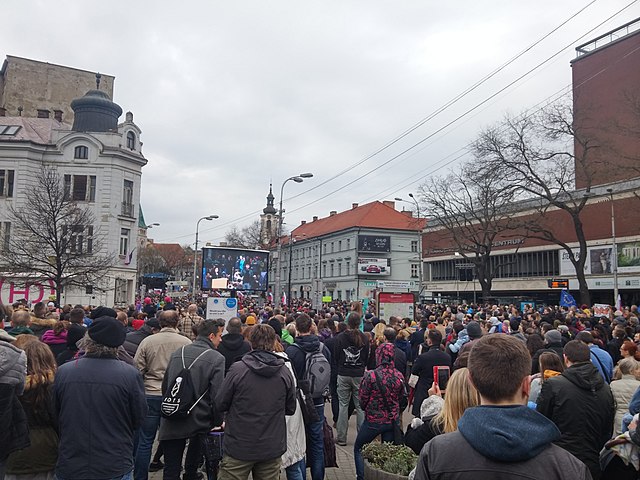 Murder of investigative journalist Jan Kuciak in 2018 provoked massive protests in the Slovak capital Bratislava (Photo: Wizzard (CC BY-SA 4.0))The Ordinary People Party (OLANO), seen as a pro-EU and pro-NATO party, won 25.02% of the vote or more than one third of the seats in the 150 seat parliament, beating the ruling Smer that won 18.29% of the vote, according to the Statistical Office of the Slovak Republic.

The party’s popularity surged as Slovaks learned about the details and motives of the murder of the young journalist and his fiance. Ján Kuciak was investigating the misuse of EU funds in Slovakia, the shady deals of certain businessmen but also the alleged links between Slovak officials and the Italian mafia.

“We took a difficult road during this campaign as we tried to wake up a sleeping dragon,” OLANO’s leader Igor Matovič told reporters in Bratislava after the election results were confirmed. “We are very happy that Slovakia has woken up,” he added.

Slovakia’s Social-Democracy Direction party, known as Smer, that ruled the country for over a decade, admitted its hardest election defeat ever.

Protests that erupetd after the murder forced the party’s founder and the country’s Prime Minister Robert Fico and three of his ministers to step down. As of then, the party’s popularity kept decreasing.

“After Ján Kuciak’s murder, a massive breakthrough occurred in a part of society. The people’s cup of patience had flowed over,” Marián Sekerák, a Slovak political analyst, told Euronews.

He stressed that the murder of Kuciak “could be recorded in Slovak history as a turning point, as it helped to fully [expose] the interconnection of clientelistic and mafia structures with the highest political figures,” which consequentially resulted with the election victory of OLANO, that promised a corruption-free government.

Following the election victory, OLANO leader Matovič said that his party takes the election result “as a request from people who want us to clean up Slovakia, to make Slovakia a just country, where the law applies to everybody regardless if he is rich or poor.”