The 2014 arrest and pre-trial detention of Azerbaijani journalist and OCCRP contributor Khadija Ismayilova was unlawful and politically motivated, the European Court of Human Rights (ECHR) ruled on Thursday. 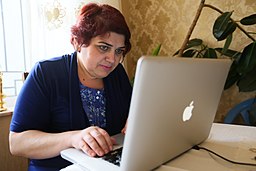 Khadija IsmayilovaBy arresting her “without a reasonable suspicion of an offence,” Azerbaijan violated several articles of the European Convention on Human Rights, the ruling said.

Ismayilova complained to the ECHR about her arrest, claiming it was aimed to silence her.

The government of Azerbaijan had accused the journalist of multiple offenses since she first began writing about the illegal businesses of President Ilham Aliyev and his family in 2010.

The investigative journalist also argued that courts in her country were not impartial or independent and that she was deprived of her right to a fair trial. The Court ruled in her favor.

“Having no access to independent judiciary in our own country, we cast our hopes for

justice upon ECHR decisions, so those who continue punishing journalists for

uncovering corruption and abuses would be held accountable,” Ismayilova told OCCRP after the ruling was announced.

The Court found that charges against her were not sustainable but did not yet rule on her final conviction in 2015 when she was sentenced to seven-and-a-half years behind bars.

Azeri prosecutors accused Ismayilova of having “incited a former colleague to commit suicide.”

This charge “was based on a false complaint made under coercion,” the ECHR said, adding that other charges raised against her a years later [embezzlement and tax-evasion] and related to her work at a radio station were not backed by facts.

Ismayilova was released under international pressure after she served more than a year in prison, but to this day she remains banned from traveling and working. Her bank accounts are frozen.

The ECHR said that Ismayilova’s case was part of a “pattern of arbitrary arrest and detention of government critics, civil society activists and human rights defenders through retaliatory prosecutions and misuse of the criminal law” in Azerbaijan.

“The plight for justice doesn’t stop with this decision,” declared Ismayilova. “We will continue working towards full justice, so the government understands that these policies don’t end with impunity.”

Media organizations and freedom of expression advocates such as Amnesty International and Media Defence welcomed the ECHR decision.

Media Defence reminded that Azerbaijan has a record of not implementing ECHR rulings.