A student who was accused of defamation for broadcasting claims that Cambodian Ministry of Justice officials took up to US$3 million in bribes to hand out passes in magistrate exams was questioned for a whole day at a Phnom Penh court late last week. 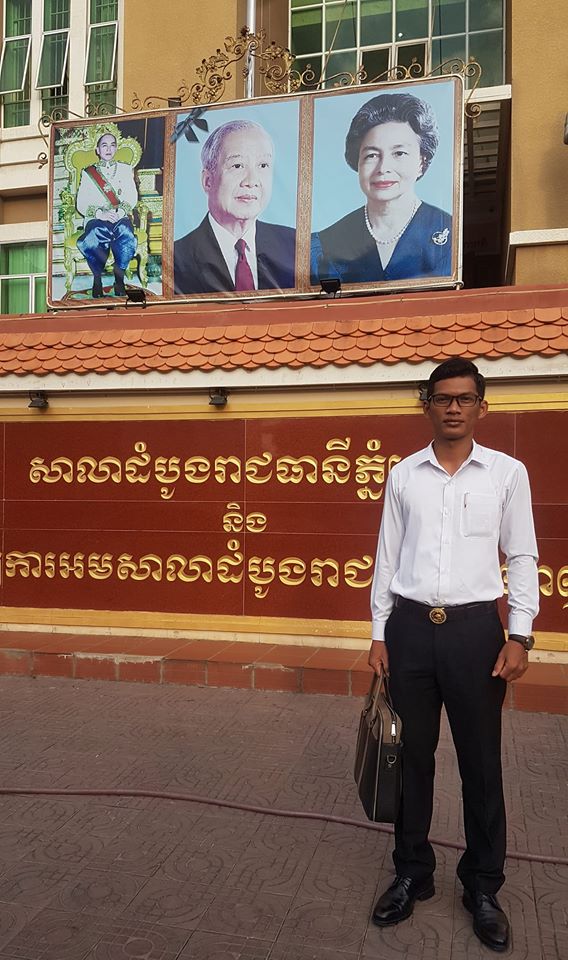 Bunrith in front of the Phnom Penh Court on the day of his hearing. Picture: Kong Bunrith’s Facebook page.

“I have arrived at the Phnom Penh Municipal Court to be ready to appear before the prosecution,” Kong Bunrith, a student at the Royal University of Law and Economics, posted on his Facebook page on Friday.

In a video he posted in January, Bunrith claimed that fellow schoolmates passed the exams by bribing officials up to $150,000. He gave out their names and publicly calculated the Ministry could have earned $3 million by selling passing grades.

Fifty-five recent judicial graduates reacted by rejecting Bunrith's accusations, saying he was out for revenge because he had failed the exam himself.

Bunrith was one of a small group of candidates who called out irregularities in November’s examination results. A complaint was filed with members of the parliament, but the government denied that the examination was unfair.

In the video he posted, Bunrith read denunciations that he claimed other magistrate candidates had sent him by private message. He told the Phnom Penh Post he “didn’t know whether they were true or not,” but that he believed they contained clues about potential corruption.

In corruption-plagued Cambodia, say experts, law is lucrative. Sophal Ear, a World Affairs professor at Occidental College in California, said cheating on exams has been endemic in the Cambodia educational system for decades.

“Lawyers are basically the middlemen between clients and courts, taking their share of bribes. Judges make even more money,” he told OCCRP. “One-hundred fifty thousand dollars to pass an exam that grants you... a job where you can make millions is not that much."

In his 2011 book, Cambodia’s Curse, journalist Joel Brinkley also described the systematic extortion of students. “Children who didn’t make the daily payments were likely to get bad grades. In some schools they were sent home or forced to stand in the corner until it was time to leave.”

That doesn’t help Cambodia’s schooling rate, easily one of the lowest in Asia. In this mostly rural country, a lot of kids leave school early above farm labor. According to The World Bank, only 40 percent of Cambodian children attend primary school. Of those, only 9 percent complete high school.

Since 2013, Cambodia’s Education Ministry has conducted a series of reforms designed to eradicate corruption in the education system. According to Ear, they weren’t efficient at all: “Any 'reform' will be co-opted. Too much money is on the line."

He said whistleblowers like Bunrith can become scapegoats for trying to raise awareness of corruption.

“It’s too difficult for one person to change," he said. "They will make an example of [him] for daring to expose corruption. If he doesn’t end up in jail, it’s likely it will cause him problems his whole life.

“He was very brave to speak up”.