Anti-graft efforts are stagnating or showing signs of backsliding in more than two-thirds of the world’s countries, including the most advanced economies of the G7, Transparency International (TI) warned on Thursday in its 2019 Corruption Perception Index (CPI). 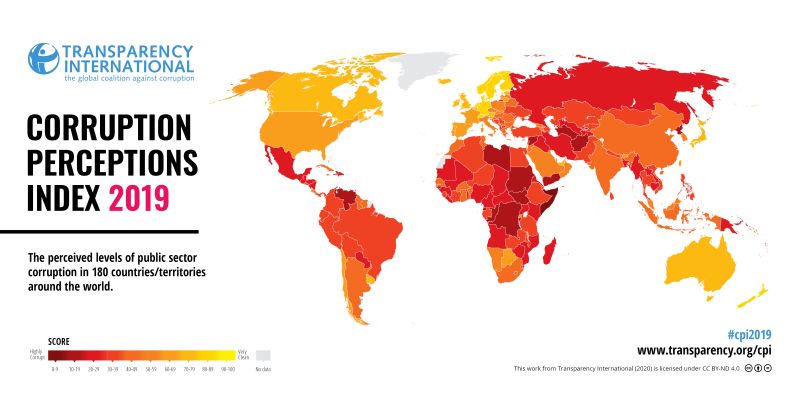 Corruption Perception Index 2019. (Graph: Transparency International)“Our analysis also shows corruption is more pervasive in countries where big money can flow freely into electoral campaigns and where governments listen only to the voices of wealthy or well-connected individuals,” the global corruption watchdog stressed.

TI’s analysis of the perceived levels of public sector graft in 180 countries or territories shows that countries with “stronger enforcement of campaign finance regulations and broader range of political consultation” perform well and have an average CPI score of 70, whereas countries where such regulations either don’t exist or are poorly enforced score an average of just 34 and 35 respectively.

Zero marks highly corrupt countries on the scale, while 100 refers to graft clean ones.

“Frustration with government corruption and lack of trust in institutions speaks to a need for greater political integrity,” Delia Ferreira Rubio, Chair of Transparency International, said in Thursday’s statement.

She warned that governments, therefore, must urgently address the “corrupting role of big money in political party financing and the undue influence it exerts on our political systems.”

The 2019 report showed that more than two-thirds of the countries scored below 50.

Four G7 countries -- Canada, France, the UK and the US, according to the report, scored lower than in 2018, while Germany and Japan have seen no improvement. Only Italy managed to gain one point more than in 2018.

“To have any chance of ending corruption and improving peoples’ lives, we must tackle the relationship between politics and big money,” said Patricia Moreira, TI Managing Director.

She stressed that all citizens must be represented in decision making, as the 2019 CPI showed that a vast majority of countries which significantly decreased their CPI scores since 2012 do not engage the most relevant political, social and business actors in political decision-making.