Journalists and political leaders on Wednesday criticized the Serbian government and said the United Arab Emirates (UAE) made a “mockery” of an international anti-corruption conference by deporting Serbian investigative journalist Stevan Dojcinovic before he could speak. 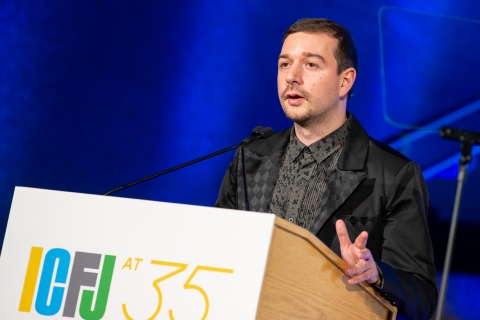 Stevan Dojcinovic, giving a speech at ICFJ Awards Dinner in Washington, DC.When he stepped off the plane in Abu Dhabi Tuesday evening, police fingerprinted Dojcinovic and took his passport.

“Police were very nice but told me that the order came from immigration because I found myself on some black list,” Dojcinovic told OCCRP. “They said that it wasn’t the UAE who placed me on the list but some other government.”

Dojcinovic, an OCCRP regional editor and founder of the Crime and Corruption Reporting Network (KRIK) in Serbia, was invited by the United Nations Office on Drugs and Crime to participate in a panel about cross-border corruption, money laundering and organized crime. The panel was part of the eighth session of the Conference of the States Parties to the United Nations Convention against Corruption (UNCAC).

After several hours in an airport detention unit, Dojcinovic was escorted to a plane to Belgrade.

“This shocking development tells us that a journalist working to uncover

corruption is not welcome at this conference,” Gillian Dell, head of conventions at Transparency International, an anti-corruption organization that took part in the conference, told participants.

She called the exclusion of Dojicnovic “shameful,” adding that the incident made “a mockery of this conference.”

In a statement, Serbia’s Foreign Ministry said the country “has never and will never suggest any other country in the world to put a Serbian citizen on any restrictive lists.”

It said Dojcinovic has not asked the Serbian embassy in the UAE for help, and its ambassador knew nothing about his deportation before it was discussed at the anti-corruption conference.

Countries make their own decisions about whom to allow entry and are not obliged to explain their reasons, the statement said.

Serbian politicians and Dojcinovic’s colleagues both blamed the government of Serbian Prime Minister Ana Brnabic and President Aleksandar Vucic, as well as the UAE.

The center-left Party of Freedom and Justice demanded that Serbia deport all UAE officials until the country apologizes to Serbia and Dojcinovic.

Party’s leader Dragan Djilas tweeted that Dojcinovic’s deportation was for “everything KRIK has written about Vucic's criminal regime. Part of the robbery of Serbia is carried out with Arab partners and the stolen money is also stored there. Need more proof than this?”

KRIK has previously come under pressure for reports relating to a Serbian businessman’s holdings in the UAE, as well as reporting on the government’s Belgrade Waterfront project, which received a significant amount of funding from the UAE.

Other media have also reported on “dubious” UAE investments in Serbia.

Maja Videnovic, an opposition MP from the Democratic Party, publically asked Brnabic if she knew which government had blacklisted Dojcinovic and what she has done about it.

The Serbian Journalist Union, UNS, has requested that Serbia’s Foreign Ministry asked the UAE to immediately allow Dojcinovic to enter. The Independent Association of Serbian Journalists, NUNS, called the incident “scandalous and dangerous.”

The association warned that “putting journalists on black lists is deeply undermining the modern democratic world, freedom of expression, movement and information.”

The Organized Crime and Corruption Reporting Project joined the chorus of critics with a statement from its founder.

“I think the relationship between Abu Dhabi and Serbia played a role in this event. Vucic has blacklisted KRIK for years,” said Drew Sullivan, OCCRP’s co-founder and publisher. “As Stevan has looked at that relationship, it makes sense that the more autocratic government of the UAE would share Vucic’s conviction that media is a danger to their corruption.”

Dojcinovic was only once prevented from entering a country, when Russia turned him back in 2015.

“I travel between two and four times a month,” he told OCCRP, noting that he had just returned from the United States and Portugal with no difficulties crossing borders.