Former PMs Among Those Convicted in Algeria for Corruption 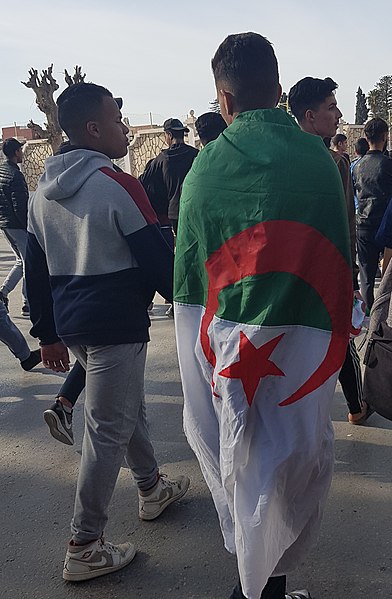 A protester, draped in his country's flag, during the 2019 protests in Algeria. (Photo: Bachounda [CC BY-SA 4.0])Ahmed Ouyahia received 15 years in prison and $16,000 in fines. Abdelmalek Sellal was sentenced to 12 years and $8,000 in fines. The two were convicted of abusing authority in an embezzlement scandal involving car manufacturers.

The trial was the first resulting from investigations into fraud allegations launched after President Abdelaziz Bouteflika stepped down in April. He did so after 20 years in office  in the face of mass protests that began in February, Ouyahia and Sellal were long-time allies of Bouteflika, having served under him in their stretches as PMs.

Multiple reports say that some protesters outside the court shouted "Gang of gangsters!" and many waved or wore the green and white flag of Algeria.

The two former PMs were not the only ones on trial. The Associated Press said that four other former government ministers and businessmen were also convicted in the case, which involved 19 defendants in total. Among those jailed was Ali Haddad, a former chief of Algeria's largest business association, who was imprisoned for seven years.

Former Transport Minister Abdelghani Zaalane was the only defendant acquitted.

The court also issued a 20-year sentence in absentia to former minister Abdesslam Bouchouareb, who is not in the country and has had an international warrant issued for his arrest.

The BBC reported that It was the first time since Algeria gained independence in 1962 that ex-prime ministers were put on trial.