The Pope Admits Corruption in the Vatican

Financial corruption exists in the Vatican, admitted Pope Francis who described it as a “scandal,” but he also pointed out that the Vatican has taken necessary steps to deal with it, the Vatican News reported Tuesday. 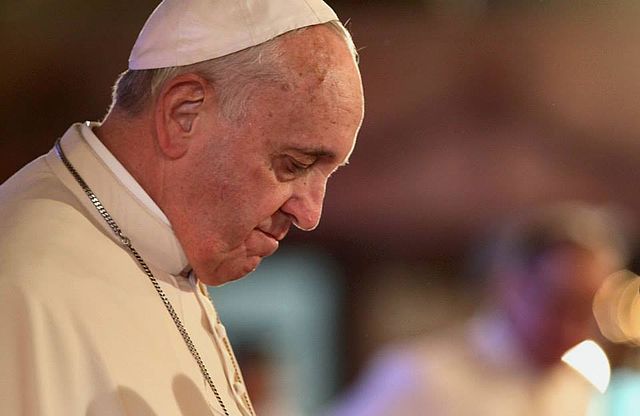 Pope Francis admitted corruption in the Vatican (Photo: Benhur Arcayan)“What happened, happened. A scandal,” the pope said during an in-flight press conference on his way back from Japan, commenting on financial scandals linked with the Vatican Bank and US$200 million investment in luxury properties in London’s Chelsea neighborhood.

The money, as the Italian magazine L’Espresso reported earlier, was obtained partly from the Peter’s Pence funds -- donations that go directly to the pope.

On Oct. 1, the Holy See Press Office issued a communique, confirming that Vatican police had raided “certain offices of the First Section of the Secretariat of State and the State Financial Information Authority (AIF),” following a search warrant by a Vatican magistrate investigating the shady purchase in London.

“Five offices were searched. Today, although there is a presumption of innocence, there is capital that is not administered well, even corruptly,” the pope told journalists aboard his flight.

He added he believes that “within a month the depositions will begin of the five people who were suspended because there was evidence.”

“They did things that appear not to be clean,” Pope Francis told journalists and repeated that the London property purchase case “was corruption nonetheless,” and that the results of the search will show whether they are guilty or not.

“It’s a bad thing, it is not good for these things to be happening inside the Vatican, but they are being resolved by internal mechanisms that Pope Benedict XVI introduced, and that are beginning to work,” Pope Francis said.

While waiting for the results of the investigation in the Vatican, the pope on Wednesday named the former head of supervision at the Italian central bank, Carmelo Barbagallo, the new AIF head, according to the Vatican News.

“I am sure that the AIF will be able to give its own contribution in its role as a supervisory authority, so that the fundamental values of fairness and transparency of all the financial movements in which the Holy See is engaged may continue to be affirmed and recognized,” Barbagallo said taking over the duty of the regulator’s president.

Soon after the raid in October, the pope also appointed one of Italy’s top anti-mafia prosecutors, Giuseppe Pignatone, to head the Vatican’s criminal tribunal.

The raid in the Holy See also prompted the Vatican’s security chief and pope’s bodyguard, Domenico Giani, to resign over the leak of a document related to the investigation.