As the season’s first snow fell, nearly a thousand people marched peacefully in the Kyrgyz capital of Bishkek on Monday in response to a recent investigation by RFE/RL’s Radio Azattyk, OCCRP, and its local member center, Kloop. 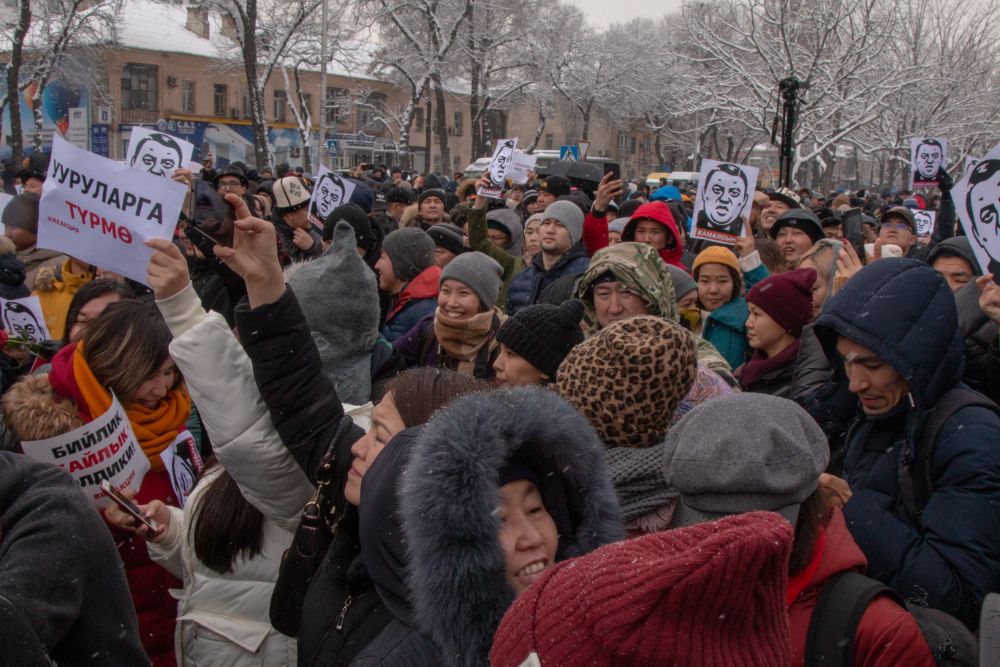 Anti-graft protests in Bishkek (Photo: Kloop.kg)The investigative report revealed that a secretive Uighur family, the Abdukadyrs, has for years been smuggling goods from China into Kyrgyzstan and onward to other countries. The profits they made with the help of corrupt customs officials were then channeled out of the country.

Reporters spent months analyzing and gathering documents from their main source, businessman Aierken Saimaiti, who laundered millions for the Abdukadyr family. While reporting, Kyrgyz journalists received threats and found themselves under surveillance. Saimaiti was recently murdered in Istanbul.

Protesters who marched in reaction to the investigation demanded the arrest of an ex-deputy customs chief, Raimbek Matraimov — also known in the country as “Raim-million” for his rumored wealth — who is implicated as a central figure in the customs service’s corruption.

Dubbed Re:Action, the protest lasted for about an hour and a half, during which activists distributed posters with slogans demanding Matraimov’s arrest and renewed efforts to fight corruption.

The investigation triggered wide public discussion across social media in which Kyrgyz citizens demanded that the matter be investigated.

“Imagine the situation: you plow the land, sow it, care for it, grow your crop,” posted media specialist Elena Voronina. “And then these locusts descend and devour your crop at its root. Matraimov & Co. are these locusts.”

At the same time, reactions from the Kyrgyz president and government were dismissive.

Reacting to the investigative report, the office of the President Sooronbay Jeenbekov issued a press statement to dismiss any connection between the president and Khabibula Abdukadyr, head of the Uighur clan. (A photo obtained by reporters and published with the investigation showed Abdukadyr attending Jeenbekov’s inauguration.)

“The president has never had and doesn’t have any joint business projects with him,” Jeenbekov’s press-secretary Tolgonai Stamalieva said in the statement.

Stamalieva also said that “the circumstances given in the material will not be left without attention,” and that the “law enforcement agencies will take into account the arguments set forth in the material.”

As the presidential statement read, the General Prosecutor’s Office and the National Security Service have opened an investigation into Saimaiti’s murder.

Matraimov himself also reacted, calling the investigation into his connections to Saimaiti and Abdukadyr family a lie.

“Because of misinformation and public slander, various opinions and fictions concerning me have been expressed. That’s why I decided to come back home,” he wrote in a message published on social media. His whereabouts are unknown.