Italians Find A Ton of Cocaine Hidden Among Bananas

Italian authorities seized a record amount of cocaine, worth an estimated €250 million (US$277 million), hidden among cases of bananas. 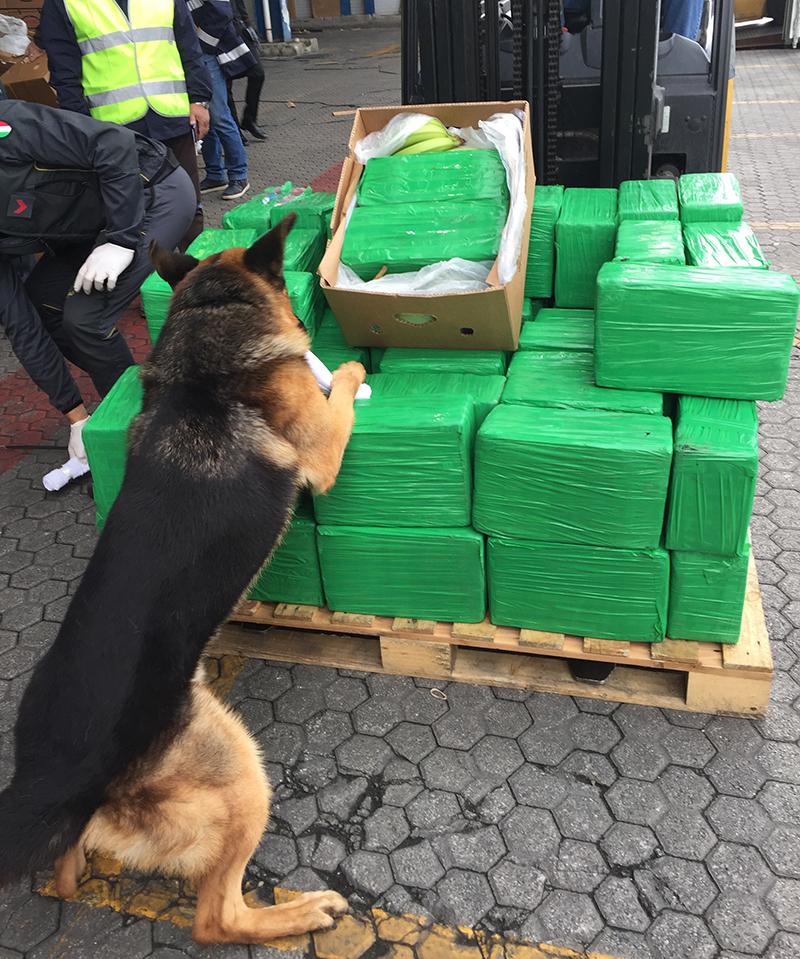 A drug sniffing dog is seen inspecting a load of cocaine filled packages containing bananas. (Europol)Authorities say 1,117 kilograms of pure cocaine was found in 144 packages inside a case of bananas in a refrigerated container in the port of Gioia Tauro last week.

“This seizure confirms the port of Gioia Tauro as a major hub for the transit of cocaine trafficked to western Europe,” Europol said in a statement Friday.

“This is also shown in other recent Italian investigations against ‘Ndrangheta criminal structures active in the transnational cocaine trafficking.”

The Carabinieri say the container originated in South America and was destined for Germany.

The drugs were found after authorities surveilled several vessels coming in to the harbour, with authorities using what they call a “risk analysis formula,” which identifies suspicious vessels or vehicles based on their location, origin, and route followed.

It’s just the latest large-scale seizure at the port this year, prompting officials to reconsider the port’s importance to drug traffickers.

“Last year, with the same control activity, we seized about 200 kilos of cocaine, over the last year about 600 kilos. In this case there was a one-ton load traveling in a single shipment,” Giovanni Bombardieri, the chief prosecutor of the Reggio Calabria district anti-mafia department, told local media.

He says it shows the Calabrian port is once again emerging as an important stop along cocaine trafficking routes, after several years of seeing drugs flow through Spanish and Belgian ports instead.

“Gioia Tauro has once again become one of the main ports for the passage of drugs,” Bombardieri said.

The ‘Ndrangheta are believed to have controlled the Calabrian port for years, funneling cocaine through it.

The Italian Carabinieri and the Guardia di Finanza led the investigation with assistance from Europol.