Corrupt officials around the World have mastered the art of hiding bribe money, but a Moscow transport security officer has come up with a new, pretty unhealthy method on Wednesday when he stuffed his mouth with banknotes and tried to swallow them as he saw police approaching his office. 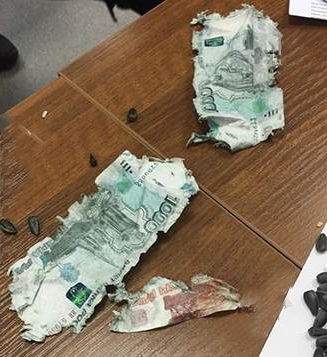 Chewed Russian rubles and sunflower seed (Photo: ТРЕВОЖНЫЕ НОВОСТИ)Major Sergei Salov of the Russian Interior Ministry’s Transport Directorate for the Central Federal District, mixed banknotes worth 10,000 Russian rubles (US$156) with sunflower seeds he found in his drawer to get the bills down more easily, Crimerussia news outlet reported.

The Major has been suspected of receiving a bribe for issuing an order to dismiss a criminal complaint, as Yelena Markovskaya, spokeswoman for the Moscow inter-regional transport investigation department of the Russian Investigative Committee told TASS news agency.

Media also cited police sources as saying that Salov’s wife recently died and that he has been raising two children on his own, so his department turned a blind-eye to what he did.

The police reportedly opened a criminal case, as well as an internal audit, but no charges against the Major have been filed yet.