Police found more than 40 skulls, 70 bones and a fetus in a jar during a raid on a suspected drug trafficking hideout in Mexico City on Saturday. The odd find came a few days after 31 cartel member suspects were arrested. 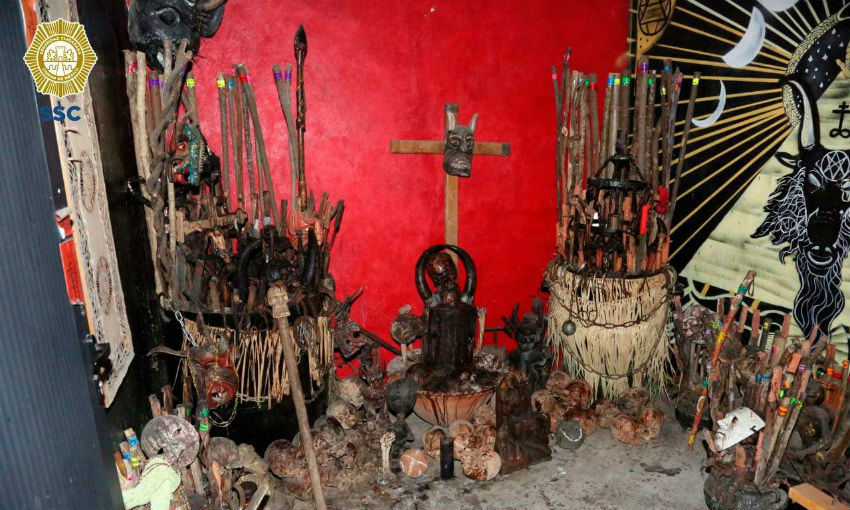 Skulls are seen at an altar discovered during a raid in Mexico City. (Source: Secretaría de Seguridad Ciudadana de la Ciudad de México)Four of the skulls were found embedded in an altar in the Tepito neighbourhood, with authorities believing the display was created by members of the Tepito Union cartel.

Police are unsure if the fetus is human.

Images released by the attorney general’s office show wooden crosses, devil masks, a painting of a goat’s head with a pentagram between its horns as well as other supernatural-themed drawings.

Mexico City Mayor Claudia Scheinbaum told reporters the skulls and bones will be DNA tested, and the results compared to lists of missing people across the country.

Thirty one people were initially arrested in the raid last week, but the skulls and bones were only discovered on Sunday.

Officials seized 50 kilograms of chemical precursor, two and a half tons of drugs - including marijuana, cocaine and methamphetamine - 13 handguns, seven long guns, a rocket launcher, 17 long-arm and 13 short-arm magazines, hundreds of useable cartridges, and five grenades in last week’s raid.

But 27 of the 31 suspects arrested were ordered released by a judge on Oct. 24.

“It should be noted that these actions were carried out in strict accordance with the law, without the use of violence or involvement with third parties and at all times the rights of detainees were respected,” the Secretariat of the Navy of Mexico - one of the enforcement groups involved in the raid - said.

But according to the federal judge who liberated the majority of the suspects, the arrests were illegal, as police had fabricated evidence and exercised unnecessary force against the possible Unión Tepitocartel members, per El Universal.

“Let’s not rush. If someone acted improperly, illegally, if there was corruption, we will condemn it,” he told the media at a press conference.

The attorney general’s office says it is still reviewing the warrants for those ordered to be released.