The man who was until last week in charge of Philippines President Rodrigo Duterte’s infamous war on drugs is now being accused of having resold the confiscated drugs along with a dozen colleagues, the BBC reported this week. 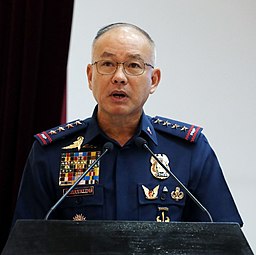 Oscar D. Albayalde in a July 2018 photo. Source: Joey O. Razon for the Philippine News Agency [Public domain]General Oscar Albayalde resigned last week from his post as head of the nation’s police force which has been criticised for alleged extrajudicial killings of drug trafficking suspects.

A criminal complaint was filed against him and 13 officers on Monday. Albayalde denied the charges against him, but said he welcomed the complaint as it will give him "due process" to clear his name, the BBC said.

Albayalde is suspected of having used his position to protect police officers involved in the illegal drug trade. He was due to retire on November 8. The Department of Justice will decide whether to prosecute the suspects.

Human rights groups have described Duterte’s war on drugs as essentially summary executions and the UN has launched an investigation into the allegations.

Duterte and his allies have been, and remain, unimpressed by the accusations. Duterte at one point has even said that “there are three million drug addicts. I’d be happy to slaughter them.”