Police in Canada’s York region announced on Wednesday that they have arrested 31 and raised 300 charges against suspected members of a human trafficking and organized crime ring that operated throughout the country. 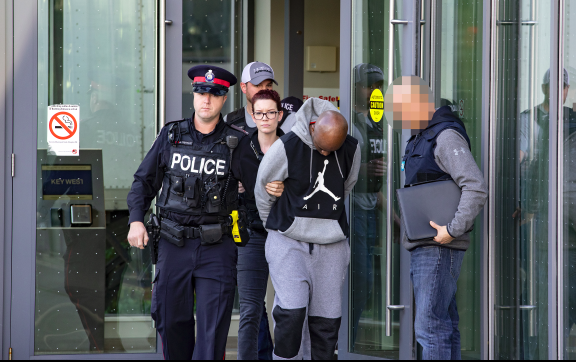 Police arrest a suspect as a result of a multi-province human trafficking investigation called Project Convalesce ( Photo: York Regional Police)According to police, the group forced women and undergage girls to work in the sex trade.

Authorities opened an investigation against alleged pimp Jonathan Nyangwila in October 2018  after two victims tried to escape and contacted police.

Nyangwila was eventually arrested in the Greater Toronto Area in July of this year. But, Truong said that while he was in jail, he continued to “control and direct individuals.”

Police also described Nyangwila’s three brothers as key figures along with 200 others at various levels of the syndicate’s hierarchy.

The year long investigation, called Project Convalesce, led to police issuing over 30 search warrants and arrest warrants last week in more than 30 locations across the Greater Toronto Area and in the Province of Quebec. Officers identified 12 victims and discovered that 30 women were involved in the sex trade organized by this group.

The confirmed victims range in age from 20 to mid-30s, and most of them are from Quebec but moved accros the country for sex trade purposes.

‘’Despite enduring violent assaults, sexual assaults, torture and other degrading circumstances, many victims are too fearful to come forward and often deny the events completely,’’ police stated.

The victims will receive adequate assistance and support in their recovery and ‘’investigators are willing to speak with anyone involved in the sex trade who may be looking for a way out or who may require assistance to escape these dangerous circumstances,’’ police said.

The Government of Canada will over five years invest CAD57.22 million (US$43.42 million) into combating human trafficking.