Few hours after he was dragged out of his room and beaten in the so-called ''torture cell,'' a Bangladesh student who criticized the state's recent water-sharing agreement with India on his Facebook page was found dead, Human Rights Watch reported Thursday. 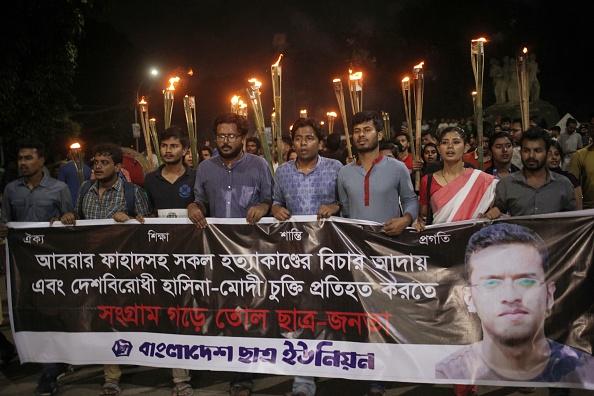 Students told local media that the following morning, broken bottles, knives and cricket stumps were found in room 2011, where they tortured the young man. According to a report from a local doctor, Fahad died due to “internal bleeding and excessive pain.”

The Chhatra League’s assistant secretary at the university claimed the victim had been questioned about his involvement with Chhatra Shibir - a student wing of the Jamaat-e-Islami organization, a right-wing Muslim nationalist movement.

He also claims the Chhatra League had evidence of his involvement in the Islamic organization, which they allegedly obtained from the phone they seized from the murdered student and from his Facebook account.

Security camera footage shows a group of young men carrying the student - still alive - out of what is known as the BCL's Torture Room, where they allegedly beat and lock up other students who disagree with them or oppose them in some way.

So far, none of the students have had the courage to talk about it.

The victim's father has filed a murder case against 19 members of the Chhatra League Group, and police have arrested 13 of them so far.

The crime has shaken the state and triggered protests by hundreds of students and teachers across the country, seeking justice for the slain young man.

Students are visibly disappointed with the situation in the country and coverage of crime by the ruling party, describing the murder as a brutal act from the Middle Ages.

“This protest is ultimately for stopping this kind of incidents, this hearsh tortures that are happening in this raging culture,’’ added another protester.

Prime Minister Hasina said the government would not interfere if the universities decided to ban political groups and she ordered her group to expel all those who support and commit brutal killings, Reuters reports.

“I can feel the pain of the parents who lost their child,” she said.

But a watchdog says the government has not done much to stop this kind of politically motivated torture among young people and citizens.

And, the group added, Bangladesh should not be a Room 2011.