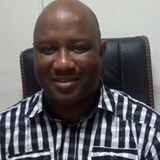 Dr. Boniface Igbeneghu, from his Facebook Page
The film was part of a year-long investigation into reports about grades being given in exchange for sex.

Female students have allegedly been sexually harassed by professors at some West African universities for decades. The documentary team led by reporter Kiki Mordi secretly recorded Dr. Paul Kwame Butakor, lecturer at the University of Ghana, and  Dr. Boniface Igbeneghu, who is both a senior lecturer at the University of Lagos as well as a pastor at Foursquare Gospel Church, putting pressure on the undercover reporter who pretended to be interested in admission.

On Twitter, Mordi said that “hundreds” asked for such an investigation.

Dr. Butakor was recorded proposing that he become the undercover reporter’s “side guy.”

Dr. Igbeneghu was filmed turning the light off in his office and asking the reporter if she wanted to kiss him. He is heard explaining how female students can pay for their grades with their bodies and that there was a special, “cold room” at the university staff club where professors take female students for “smooching.”