The retirement of outdated Kenyan banknotes has revealed tens of millions of dollars that had likely been earned via criminal activity, the Central Bank of Kenya announced on Wednesday. 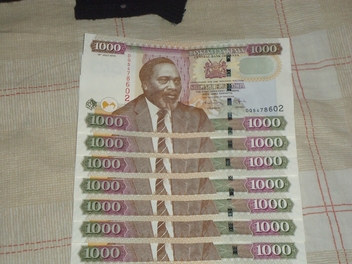 The old 1,000 Kenyan shilling notes (Photo: Lewis Mutugi, CC BY-SA 4.0)The press release said that the “demonetisation exercise” that “was aimed at addressing the grave concern of illicit financial flows, and the emerging risk of counterfeits,” had concluded.

After issuing a recall of the old 1,000 Kenyan shilling notes (KSh), and setting a September 30 deadline for their return, the Central Bank failed to receive currency worth KSh 7.386 billion, or US$ 71.29 million.

Since most of this cash “was held by individuals who were unable or unwilling to subject themselves to the robust checks in place,” i.e. criminals or corrupt individuals, their unexchanged money was rendered worthless and they suffered a substantial financial loss.

If individuals wanted to exchange large sums, they needed to explain the money’s origin - a requirement that probably dissuaded a host of criminals and corrupt elites whose incomes were made illegally, per Reuters.

In addition, “the demonetisation exercise had little impact on the economy - inflation, exchange rate, etc.,” according to the Central Bank.

Though this operation marks a success for Kenya’s anti-corruption efforts, the country still faces challenges.

“Kenya’s competitiveness is held back by high corruption levels that penetrate every sector of the economy,” according to GAN Integrity.