U.S. and Nigeria Crack Down on Internet Scams

Authorities in several countries have arrested nearly 300 scammers, most operating from Nigeria, a US Department of Justice press release stated Tuesday. 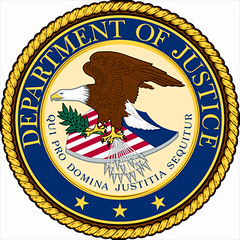 Seal of the U.S. Department of Justice (Photo: Mike Licht, flickr)Operation reWired, which harnessed the resources of US departments including the Postal Inspection Service and law enforcement agencies around the world, resulted in the arrests of 281 individuals, including 74 in the United States, 167 in Nigeria, 18 in Turkey and 15 in Ghana. More arrests were made in the United Kingdom, France, Italy, Japan, Malaysia, and Kenya, and authorities seized almost 3.7 million USD.

“The Department of Justice has increased efforts in taking aggressive enforcement action against fraudsters who are targeting American citizens and their businesses in business email compromise schemes and other cyber-enabled financial crimes,” said Deputy Attorney General Jeffrey Rosen, as quoted in the release.

“Anyone who engages in deceptive practices like this should know they will not go undetected and will be held accountable,” he said.

BEC can take many forms, including romance scams, which convince victims they are giving money to a romantic partner, or lottery scams, which persuade “winners” to pay substantial taxes and fees before receiving their prize money.

Money mules act as intermediaries, moving funds from the victim to the scammer via wire transfer. Some of these mules are victims themselves, unaware of criminal activity, but others are willing accomplices.

BEC schemes can ruin individuals and businesses, but also undermine the world economy. Due to the impact of BEC and Email Account Compromise, a similar scam, the international market lost over 1.3 billion dollars in 2018, according to  the International Crime Complaint Center.