For the twelfth time this year, a journalist has been killed in Mexico, the most dangerous Latin American country for investigators, where dozens of reporters were assassinated over the past decade, human rights advocates said Saturday. 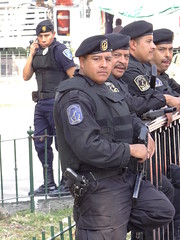 Mexican Federal Police (Photo: Adam Jones, flickr)According to a statement released by Mexico’s National Human Rights Commission, the body of Nevith Condés Jaramillo, 42, journalist and creator of the news website “El Observatorio Del Sur,” was found in his home in Cerro de Cacalotepec, a community in the Tejupilco Municipality of the south-central State of Mexico.

The statement relates that he died of wounds inflicted by a bladed weapon.

The Commission “energetically condemns the new case of violence,” cites violence against journalists “as one of the principal obstacles to the consolidation of our country as a democracy,” and urges “authorities at the three levels of government [to] apply themselves to the prevention, protection and timely investigation of these incidents.”

Since 2000, 153 journalists have been killed in Mexico. According to the media non-profit Reporters Without Borders, no Latin American country is more dangerous for investigators.

Journalists who take on organized crime groups and corrupt officials commonly face warnings that may precede acts of physical violence. In Jaramillo’s case, recent stories had provoked the local government, resulting in threats before the murder, according to a Reporters Without Borders spokeswoman quoted in The Yucatan Times.

Mexico’s murder rate is predicted to rise to an all time high this year, and may surpass the 29,111 murders reported in 2018, according to Reuters. Most victims are directly involved in drug-related violence between criminal groups.

However, journalists don’t seem to be discouraged. True to Jaramillo’s pledge on the “El Observatorio del Sur” website, many more will “break the silence.”