Hundreds of women filled the streets of Mexico City on Friday night to demand greater safety for women and justice for two teenage girls who were allegedly raped by policemen. 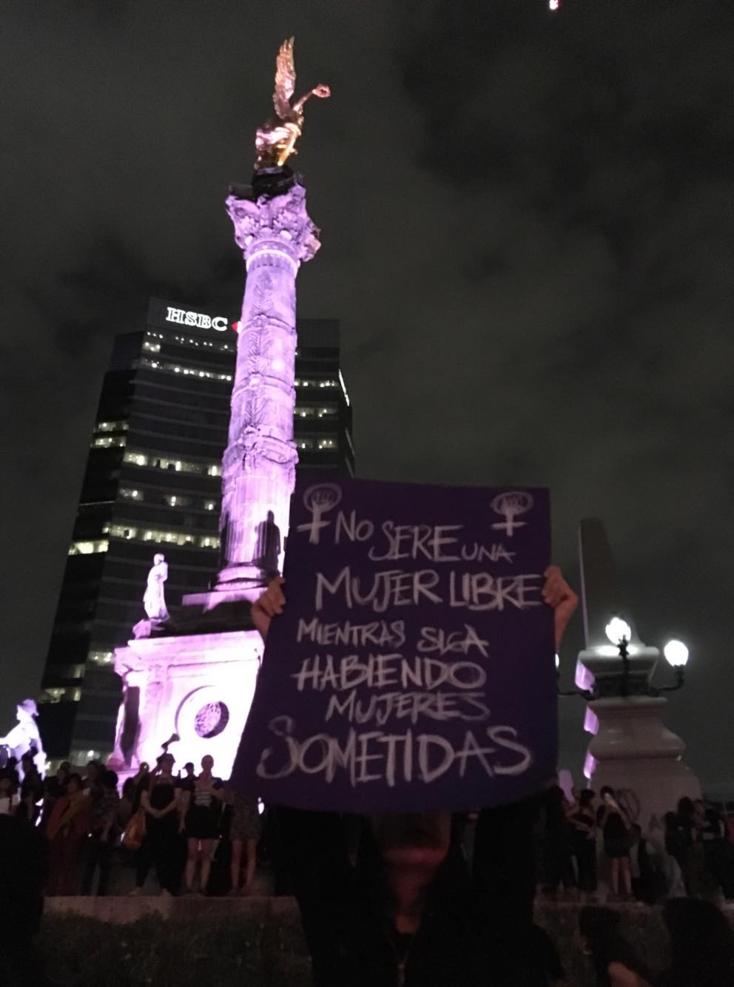 Protestors gather at Mexico City’s Angel of Independence monument (source: Pam GarciaUnder the shared motto of “they don’t take care of us, they rape us” and armed with posters, spray paint, and glitter, the women gathered to express their anger with the way authorities are handling the cases.

A 17 year-old girl was allegedly raped by four police officers in a patrol car on August 3. A few days later, a 16 year old girl was raped in a museum bathroom by a policeman, El Pais reported, citing feminist groups. According to the paper, six police officers were suspended as a result of the ongoing investigations into the cases but none were detained or arrested.

The demonstrations began last Monday and have been labeled the “glitter protests” after participants threw pink glitter at the city’s Security Minister while he was delivering a press statement.

Many protesters have accused the authorities of bungling the investigation as allegations of inconsistencies in the case’s handling have surfaced. Another report by El Pais stated that it took four days for authorities to run the basic garment, fluid, and residue analysis that are used to investigate such crimes.

“What we wanted out of the protest that took place on Monday was for the authorities to do their jobs, as they are making all types of excuses in order not to investigate these cases, and imprison the police officers that were responsible for the violation of two women,” Pam Garcia, who attended the gathering, told OCCRP.

On Friday night the women wielded spray paint and wrote phrases like “rape state” on the walls of a city monument and a local police station. While the gathering was largely peaceful, some of the participants smashed windows at a bus station and set fire to the second floor of a local police station, according to BBC.

For Alejandra López, a Mexico City native who eagerly kept track of the protests, the demonstrations have been a long time coming.

For Lopez, seeing the images of the crowd was a source of joy, but she found herself frustrated by some of the reactions on social media that seemed to try to use the vandalism as a way to discredit the protests.

“I don’t know what will come next, but so far, I thank the women who have risked everything to go out and shout about what the government is doing to them,” she told OCCRP.

In a press statement released Friday, Mexico City’s mayor Claudia Sheinbaum expressed support for the fight for gender equality but denounced the use of violence during the protests. Sheinbaum stated that there will be “no impunity” for those found guilty of instigating violence against journalists or defacing public buildings during the protest.

“We call on those who legitimately fight for the defense of human rights and the eradication of violence to help create a climate of peace and to build together a safe city of rights,” Sheinbaum said in the press release.

Yet Sheinbaum also implied that the protest was intended to provoke the government to use public force, stating that “this is what they are looking for.” Garcia, like many other protesters, disagrees with the statement, countering that demanding justice is not a provocation.

On Sunday evening a local feminist group posted on Facebook that 40 feminist activists had met with Sheinbaum to discuss the events of the week. Resulting from the discussion was an agreement to not pursue investigations against the protesters and the possibility of a public apology from the government for criminalizing the protests.

Violence against women has long been a prevelant social issue in Mexico.

In its 2019 country report, Human Rights Watch stated that “Mexican laws do not adequately protect women and girls against domestic and sexual violence.” According to El Universal, a woman is raped in Mexico every six minutes. In 2016 at least seven women were killed every day, the United Nations reported.

These factors have fostered an untenable situation. For Garcia, the time has come for the Mexican government to listen to women’s demands and to ensure equal rights and protections for them.

“The heart of the matter is that Mexican women will never be silent about the violence we receive everyday, we will disturb until we are heard, and until we are taken care of,” Garcia said.