One of the vice presidents to Zimbabwe’s former leader Robert Mugabe turned around and sped away when anti-corruption investigators tried to approach him, reported the South African media outlet News24 on Monday. 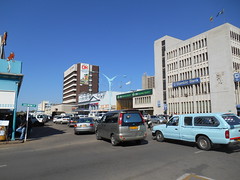 Bulawayo, Zimbabwe (Photo: Mike, Flickr)Phelekezela Mphoko was set to meet police in Bulawayo, the country’s second-largest city, to provide a statement on allegations that he had committed a criminal abuse of office in 2016, according to the Mail & Guardian.

Mphoko had purportedly ordered the illegal release of the acting chief executive and non-executive director of the Zimbabwe National Road Administration, who were charged with defrauding their organisation of 1.3 million US$.

However, before arriving at the rendezvous point to meet with officials from the Zimbabwe Anti-Corruption Commission (ZACC), Mphoko made a U-turn and fled.

“When our officials got there, he ran away and he is a fugitive of justice and ZACC officials are on the ground hunting for him,” spokesperson John Makamure told the AFP.

In a Friday Twitter post, ZACC revealed they had attempted to contact Mphoko previously, stating that “yesterday our officers visited the former VP Phelekezela Mphoko at his residence. The officers intended to question him with a view to record a warned and cautioned statement. The matter relates to abuse of office while he was VP.”

However, when Mphoko’s family turned the officers away, ZACC wrote that it was “sad that the former VP refused to collaborate with the enforcement officers and unfortunate that he and those around him believe that they are above the law.”

Mphoko’s lawyer, however, has challenged these criticisms. After Mphoko’s escape, he stated the Commission had originally directed his client to appear in court, but when officials had later directed him to go to the police, he grew uneasy.

“My client fears for his life and he believes that people are out to abduct him and cause danger to his life by injecting him with a lethal poison,” quoted the Mail & Guardian.

Prior to Mugabe’s exit from office, Mphoko and Emmerson Mnangagwa, the current president of Zimbabwe, had served together as co-vice presidents and leaders of the Zimbabwe African National Union - Patriotic Front, the country’s ruling party since 1980.

But the men suffered a falling out, and Mphoko likely supported the presidential bid of Grace Mugabe, Robert Mugabe’s wife, over that of his former ally.

The search for Mphoko is ongoing.