Riot police used teargas and water cannons to try to disperse protesters who took to the streets on Tuesday to demand President Juan Orlando Hernandez’s resignation after the US accused him of turning Honduras into a narco-state, the BBC reported. 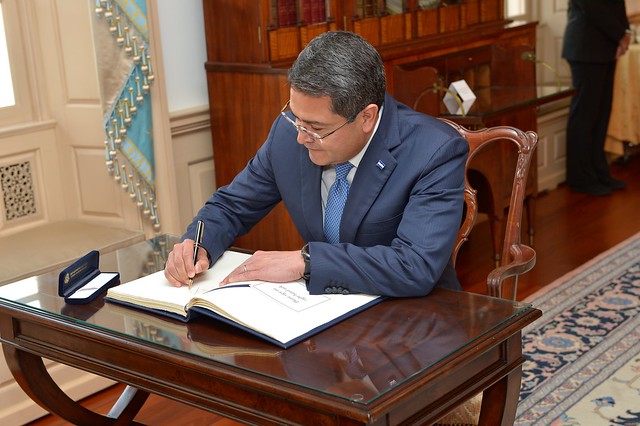 (US Department of State)
("The narco must go, JOH must go!" thousands of people chanted as several buildings were set on fire in the capital of Tegucigalpa.

US federal prosecutors have accused the President of cooperating with drug traffickers, helping them transport cocaine and accepting their donations for his presidential campaign.

The 44-pages document filed in New York’s southern district on Friday describes Hernandez as a  “violent, multi-ton drug trafficker” who abused his political connections for personal and political gains and at least twice and “helped arrange murders of drug trafficking rivals.”

Prosecutors say that in 2004 Hernandez abused his family’s political influence to create his relationship with narco traffickers and in exchange for bribes provide them with “information about law enforcement activities and operations so that the traffickers could transport cocaine through Honduras without incident.’’

A day after the document was made public, Hernandez’s office tweeted a statement, accusing drug traffickers of making false claims against him because he was going after them.

“The drug traffickers are looking for revenge against the only president who’s done what he needed to do,” the statement said. “These are false accusations made by a drug trafficker.”

Hernandez also addressed the nation on Saturday and called on Hondurans to join forces and “continue the struggle to recuperate our country as we have been doing…and finally finish off all these criminal organizations that have caused so much suffering and pain for the Honduran people,” emphasizing that nobody is above the law.

Hondurans did not believe him.

They fought back with sticks and stones after police deployed teargas and the fire department reported that three commercial businesses were set on fire during the violent protests.