Algerian courts ordered the arrest of three former ministers from President Abdelaziz Bouteflika’s administration on Monday and Tuesday, the latest in a series of corruption charges against the previous President’s allies. 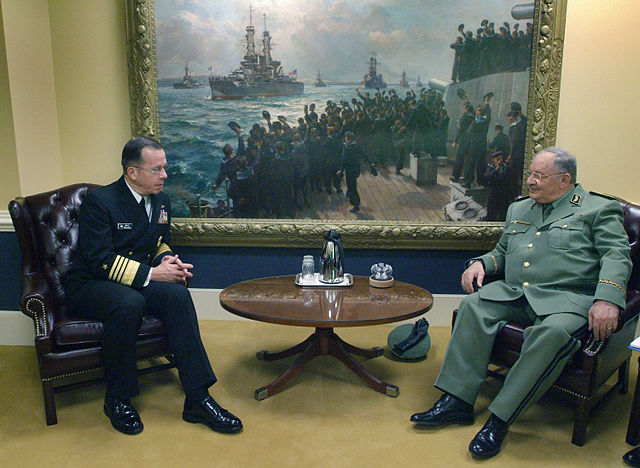 Algerian Army Chief Gaid Salah (right) sits with a US Naval Chief at a meeting in 2006. (Johnny Bivera, Public Domain)Former Public Works and Transportation Minister Abdelghani Zaalane and Minister of Labor Mohamed El Ghazi were ordered into custody by the Supreme Court for their alleged “intentional waste of public property,” the Daily Sabah reported.

Former Minister of Defense Khaled Nazar was the subject of an arrest warrant from an Algerian military court for conspiring against the army and creating public disorder, Bloomberg wrote.

The three were close allies of the former president, with Zaalane agreeing to run his planned re-election campaign for 2019 that was cut short with a sudden resignation amidst protests.

The ministers are just the latest in a series of arrests over corruption from the previous administration. Former Prime Ministers Ahmed Ouyahia and Abdelmalek Sellak were handed charges of "dissipating of public funds,” among others.

The transitional government also went after a number of billionaires close to the president following his resignation in April.

The arrests have come during the months of unrest following the president’s ousting, with an apparent standoff between powerful military leaders and popular opposition figures. Army Chief Gaid Salah has been pushing for elections to commence despite a lack of agreement on how to proceed following the former president’s two-decade rule.

“Elections are the essential point around which dialogue must focus, a dialogue that we welcome and hope will be successful," Salah said in a televised speech.

The stream of protesters are unconvinced as Algeria has already postponed their elections, intended to begin in July, because of the rejection of the only two candidates running.