The girl leaving the prison after having visited her father did not resist when authorities took off her glasses and then her wig. 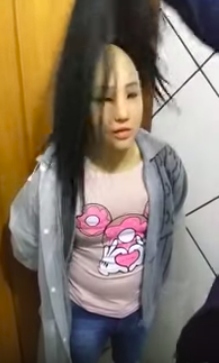 Authorities remove da Silva's disguise (source: Prison officials)With her bald head exposed, she began cooperating and took off her sweatshirt and her bra. A male torso appeared. Then the plastic mask came off and - voila - Brazilian gang leader Clauvino da Silva was exposed.

Da Silva left his cell disguised as his daughter, Ana Gabriele Leandro da Silva, hoping to blend in with the crowd of exiting visitors. It appears that the plan entailed leaving his daughter in the cell, according to The Guardian.

It was not da Silva’s poor disguise which aroused the suspicion of the prison guards, but rather the suspect’s “nervousness."

Authorities at the prison have apprehended eight individuals allegedly tied to the failed escape plan, The Rio Times noted. They supported the execution of the plan by helping provide da Silva the wig, clothes, and mask he needed to execute the stunt.

This is not the first time that the gang leader has attempted to escape. In 2013 he and 30 others were apprehended in trying to break out of the Gericinéo Prison Complex.

According to O Globo, da Silva has been moved for the time being to a maximum security prison unit and placed under solitary confinement for ten days, after which he may face further disciplinary action.

His daughter has been charged with attempting to help him escape and will be tried in the Special Criminal Court, O Globo reported.

The Gabriel Ferreira Castilho Prison complex is known for housing some of the highest members of Comando Vermelho, one of Brazil’s most powerful criminal gangs. O Globo reported that da Silva is a former member of the Angra dos Reis drug cartel.

Security in Brazil’s prisons has been a sentient topic over the past week. Last Monday a facility in Northern Brazil was rocked by a prison riot between Comando Vermelho and a rival gang that killed 57 prisoners and left 16 decapitated.