Vietnam Seizes US$7.5 Million Worth of Rhino Horns

Authorities at the Hanoi International Airport discovered 125 kg of rhino horns encased in plaster being smuggled through the airport, the state-sponsored Vietnam News Agency reported Saturday. 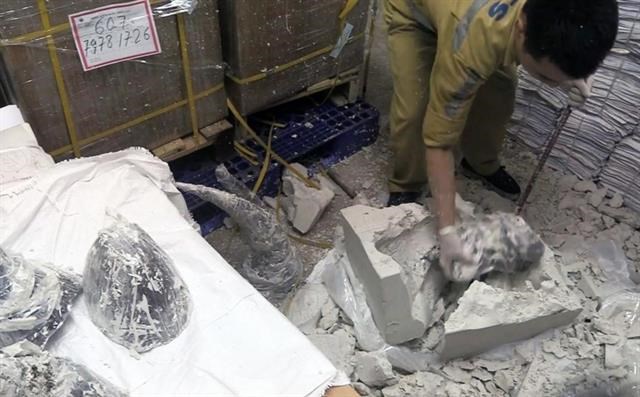 The rhino horns weighed 125 kg (source: Vietnam News Agency)It took the authorities half a day to break open the plastic molds in which the horns had been hidden before being put into 14 crates registered with a “green-line declaration” - a status that would enable them to circumvent a customs check.

Nevertheless the crates, which arrived in Vietnam on an Etihad Airways flight from the United Arab Emirates, managed to arouse the suspicion of customs officials, according to The Guardian.

Though the rhino horn trade is illegal in Vietnam, the tusks are valued and coveted for their perceived medicinal qualities and are prized goods on the black market. The Guardian reported that the seized rhino horns are valued to be worth approximately US$7.5 million.

The bust is part of a wider effort in the country to crack down on the illegal wildlife trade. It was also not the only incident of its kind last week.

According to the Vietnam News Agency, on Tuesday Hanoi arrested three men in connection to a tiger trafficking ring, after discovering the frozen carcasses of seven tigers in their vehicle.

One of the men arrested had been the group’s ringleader for years. He told the police that he had purchased the tigers in Laos and had brought them to Hanoi to be sold.

A United Nations report released earlier this month detailed the rising profits being raked in by organized crime groups in Southeast Asia through the trafficking of counterfeit goods, wildlife, and people. Southeast Asia, it stated, is the hotbed of some of the world’s largest illegal wildlife markets, where African ivory and rhino horn are focal points of concern.