Deutsche Bank has flagged suspicious financial transactions in accounts belonging to Jeffrey Epstein, the multi-millionaire who was arrested for sex trafficking in New York earlier this month, the New York Times reports. 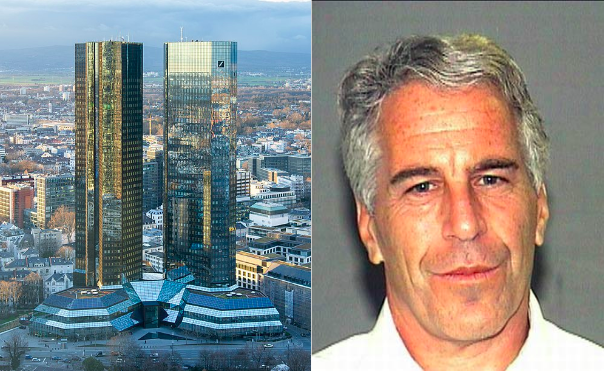 Left: Deutsche Bank headquarters (Epizentrum), Right: Jeffrey Epstein’s 2006 mugshot (Palm Beach County Sheriff's Department) The news reflects the latest attempt to get to the bottom of the murky financial background of Epstein, who rubbed elbows with the world’s most wealthy and powerful, had homes across the globe, an annual income of US$10 million in addition to an over $500 million net worth, and kept a stash of 48 loose diamonds and a forged Saudi Arabian passport in his Manhattan home.

The bank discovered the transactions - in which Epstein had moved millions of dollars of cash and securities through “dozens” of private accounts - while trying to investigate whether he has used his wealth for sex trafficking purposes.

According to the Wall Street Journal, Epstein began relying on Deutsche Bank’s private banking division to manage his assets in 2013 after being dropped as a client for “reputational concerns” by JPMorgan Chase & Co, with whom he had previously had a “longstanding private-banking relationship.”

The Times and other publications have noted that Deutsche Bank took Epstein on as a client several years after he was first publicly linked with prostitution and child rape allegations in the late 2000s.

Since the Miami Herald began publishing its most recent investigation into Epstein’s “plea deal of the millenium” in autumn 2018, Deutsche Bank has reportedly been working on severing its ties with the sex offender.

In interviews with the Times, people at Deutsche Bank noted that this has been a protracted process. According to one source, on “a number of occasions” the bank thought it had successfully shut down all of Epstein’s accounts, only to shortly thereafter discover new ones it had not been previously aware of.

A Deutsche Bank spokesperson told the Times that it believes all remaining accounts have now been closed, however, and that the bank was “absolutely committed to cooperating with all relevant authorities.”

Earlier this month, Bloomberg identified more than 30 shell companies linked to Epstein in the U.S. Virgin Islands and New York, through which he owned a private island, his Manhattan mansion, and his private jet.