For nearly fifteen years, the banner on the front page of one of Gambia’s daily newspapers, The Point, has asked the same question each morning: Who killed Deyda Hydara?

An answer was finally delivered at a Truth, Reconciliation and Reparations Commission session on Monday, when an officer from the Gambia Armed Forces admitted to having belonged to the killing squad that murdered one of Gambia’s most respected journalists on the orders of former president Yahya Jammeh. 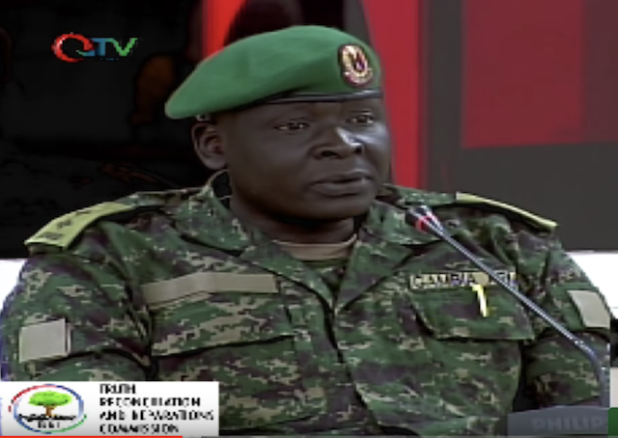 A former member of ex-president Yahya Jammeh’s “elite killing squad”, Malick Jatta gave an unprecedented testimony this week (QTV Gambia) Hydara was an outspoken critic of Jammeh’s government and wrote extensively about its rampant corruption for The Point, AFP, and Reporters without Borders, among other outlets. He was shot dead at age 58 in December 2004 by previously-unidentified assassins while driving home from work in the small coastal city of Banjul.

Many in Gambia have long assumed that Jammeh, whose 22 years in power were notably marked by human rights abuses and the oppression of the press, and who once publicly stated that “anybody bent on disturbing the peace and stability of [Gambia] will be buried six feet deep,” was behind the murder.

His government consistently denied that charge.

Lieutenant Malick Jatta’s testimony on Monday marks the first direct account of how the murder took place. In addition to himself, Jatta named three other men who were involved in killing Hydara, including the late Tumbul Tamba who has previously been identified as the head of Gambia’s “Junglers”, Jammeh’s “elite death squad.”

The operation to kill Hydara was known as “magic pen,” according to Jatta, and in his testimony he described a car chase in the lead up to the murder, with Tamba coordinating the movements of at least three taxi-cars that were all tailing Hydara during the December evening.

"Our commander, Captain Tumbul Tamba, was communicating to the former president, Yahya Jammeh, on the phone during the operation. He was saying to him, 'Yes Sir, Your Excellency,'" Jatta said.

Jatta claims he was unaware of who the target was at first.

“[Tamba] was shouting; shoot, shoot, you better shoot! When we shot, he never stopped. He drove through the streets,” he described, “I shot one [bullet]. I cannot know how many bullets my colleagues shot.”

He learned that they had killed Hydara the following day, and also said that he and his colleagues received a D 50,000 cash sum (US$1,000) as a reward from “the big man.”

Jammeh has lived in Equatorial Guinea under the protection of its own tyrannical and corrupt leader, Teodoro Obiang, since being forced out of office in 2017.

The emergence of a video of Jammeh and Obiang engaged in a “despots’ dance” in a lavish hotel together over this past New Years appeared to dash hopes that Obiang would carry out requests to extradite Jammeh back to Gambia when the time came.

“I believe that the stance of protecting former heads of state is a correct one,” Obiang said in January.

As the number of human rights abuses Jammeh stands accused of continues to grow, however, some anticipate that Equatorial Guinea will eventually face unyielding pressure to extradite the ex-president.

He is currently being investigated for serial rape; ordering the killing of over 50 migrants in 2005, whose bodies were later dumped in Senegal; and stealing hundreds of millions of dollars from the state, as has been investigated by the OCCRP.

Jatta also testified to having participated in the murder of the 50 migrants when he was part of the “junglers,” and said the armymen were told by commanders that the migrants were “mercenaries.”

“I heard people shouting in the forest saying ‘save us Jesus,’” he recalled, continuing that he remembers being told “the order from Yahya Jammeh is that they are all to be executed.”