The Iraqi government issued warrants for 26 former and current top officials, including 11 ex-ministers who are suspected of corruption, Prime Minister Adil Abdul-Mahdi told the press on Tuesday. 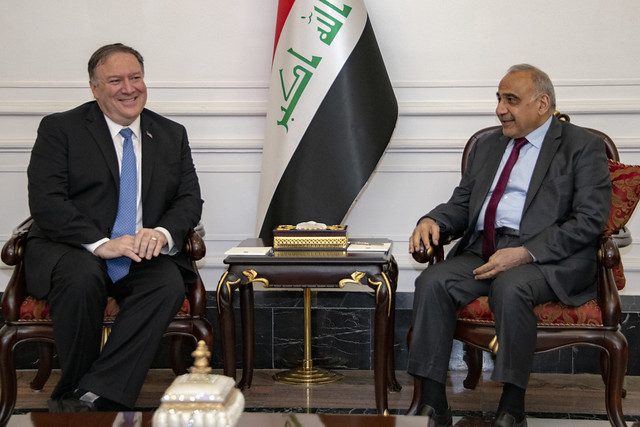 Prime Minister Adil Abdul-Mahdi meets with US Secretary of State Mike Pompeo in MayThe Prime Minister also noted that over 1,200 graft cases have been sent to various courts in the past six months, and that there are over 4,000 current investigations underway across the country.

"The Anti-Corruption Council has strengthened its measures to fight corruption and to pursue the corrupt. We will mention the names of the accused if the investigations prove their corruption," the Prime Minister said.

The warrants issued include 15 director-generals - who are a step lower in rank than the ministers - but still prominent bureaucrats.

Sources told Asharq Al-Awsat that none of the warrants are for current members of the cabinet, and that some of the ministers live abroad and would require extradition in order to be charged.

Abdul-Mahdi and Supreme Judicial Council Member Fayeq Zaidan met a day earlier to discuss lifting immunity for lawmakers accused of corruption prior to their election.

Zaidan also requested that the agencies with current investigations move quickly so that the courts can formally charge those found to be corrupt.

Abdul-Mahdi and his alliance of parties ran on a platform of reform and anti-corruption in 2018, but they have struggled to progress in the face of widespread resistance from various agencies, local news said.

In March the country issued a warrant for the arrest of a provincial governor following his firing at the behest of the Prime Minister.

Iraq ranked 12th in Transparency International’s 2018 Corruption Perceptions Index, and scored only an 18 out of 100, indicating a high perception of corruption.

Over US$320 billion has been stolen from the country through graft in the past 16 years, Al Jazeera found last year.