Zelenskiy Says Rooting out Graft Not as Simple as He Imagined

Recently elected President and former comedian Volodymyr Zelenskiy candidly expressed his growing awareness of the sizable challenge he faces in his crusade to uproot corruption in Ukraine, the campaign promise that paved the way to his surprising victory in April and one he says is still his “top priority.” 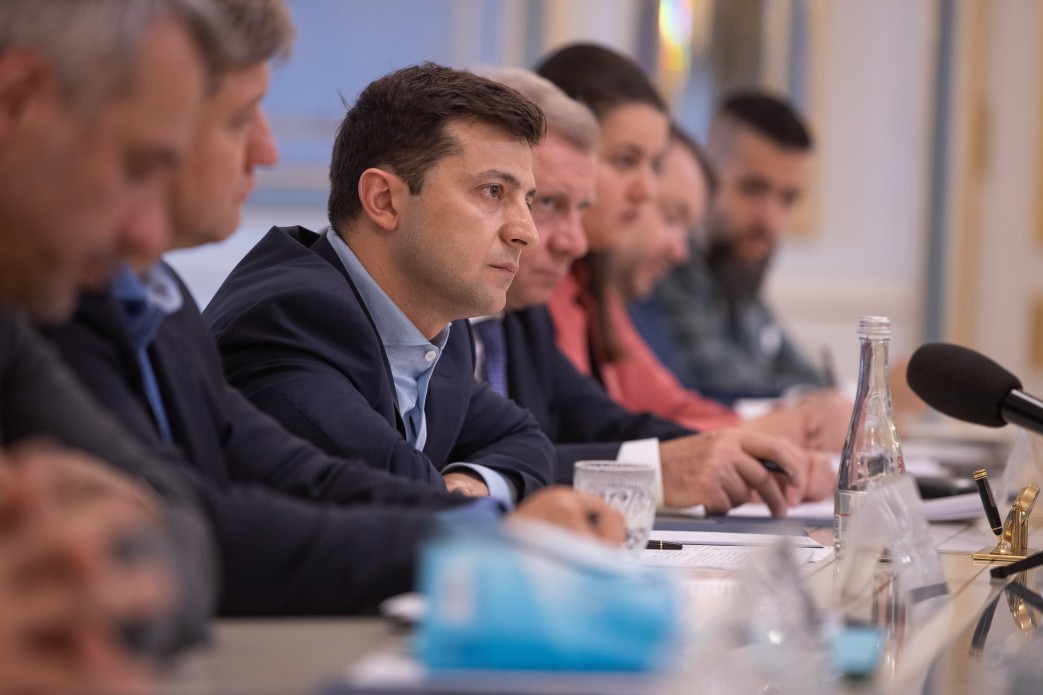 The recomposed Anti-Corruption Council met on Thursday (President of Ukraine Official Website)In a televised interview on Wednesday with Ukrainian media, Zelenskiy described his first days in office as being largely dedicated to bringing together top law enforcement officials and strategizing about how they would go about tackling the country’s corruption problem.

He described outlining to the group the multiple corruption-related issues he wanted to tackle: journalists being harassed, activists being killed, the Svynarchuk family (the allegedly corrupt “cronies” of former President Poroshenko) and how to “get them," only to be told that the real impediments were bodies like the Special Anti-Corruption Prosecutor’s Office (SAPO) and the National Anti-Corruption Bureau (NABU).

“SAPO says the NABU is to blame, NABU says that SAPO is to blame, and prosecutors said that, had there been the political will, they all would have been jailed,” Zelenskiy said.

He expressed hope that the upcoming Parliamentary elections on July 21 will fill the new government with more “normal people” and flush out individuals from what has been viewed as a corrupt political class.

Zelenskiy issued presidential decree No. 453 on June 25th that rebooted the composition of the Council so that it includes experts from non-governmental organizations, anti-corruption agencies, and business associations. It now also includes representatives from international anti-corruption organizations and agencies, such as the United Nations, World Bank, and the EU Anti-Corruption Initiative, in official observer roles.

At the new Council’s first meeting on Thursday, Zelenskiy called for two new corruption probes into the country’s defense and poultry industries, and officially re-launched the body.

“The Anti-Corruption Council did not work for the last three years,” Zelenskiy said at the meeting, “I hope that it will become a real communication platform for all anti-corruption bodies, public, business, experts, analysts, for all.”

At the meeting Zelenskiy said that 16 corruption-related cases have already been brought to the Verkhovna Rada, Ukraine’s parliament, and also called upon the Council to investigate MHP SE, the leading agriculture firm in Ukraine that provides 35% of the country’s chicken supply.

The company received US$97 million in state subsidies in the 2017-2018 budget, despite the fact, Zelenskiy said, that the company was making “excess profit” and paying “huge dividends to its shareholders."

He also announced a recent investigation into a corruption scheme in Ukraine’s defense industry, which involved the unexplained transfer of nearly $30 million to offshore accounts under the previous government.

Though he spoke positively about the current working dynamics between SAPO and NABU, he also reiterated the monumentality of the job of rooting out corruption, “because we have corruption on a large scale.”

“We have a difficult task,” the President concluded, “to reestablish people’s credibility, create an effective system for preventing corruption, establish the principles of the rule of law, honest, integrity and truly effective social control."