Italian police and the FBI arrested on Wednesday 19 members of two Italian Mafia clans that were trying to build up their criminal power in Palermo while maintaining their connections in the United States. 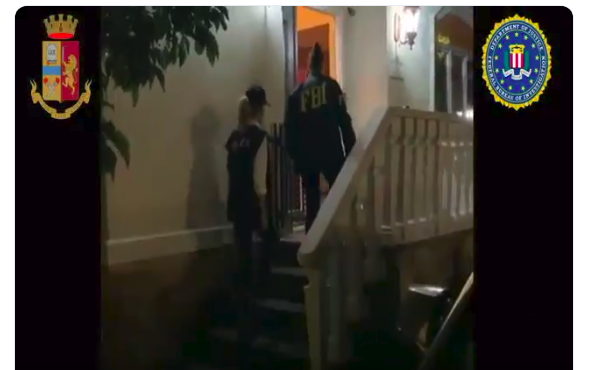 FBI agents enter a home in connection to the "New Connection" case (Source: Polizia di Stato Twitter)Authorities in Italy arrested in Palermo 18 suspected members of the “Cosa Nostra” crime families, the Inzerillo and the Gambino, while one was nabbed by the FBI in New York.

The Inzerillo family returned to Palermo a few years ago while the Gambinos split their family between there and New York.

Police arrested Tommaso and Francesco Inzerillo as well as Salvatore Gambino, the mayor of Torretta, a village 30km west of Palermo, during Wednesday’s raids. Torretta, along with Passo di Rigano and Boccadifalco, are towns where the Gambino and Inzerillo families located their clandestine business.

The arrests come five months after the capo of the Gambino family, Francesco “Franky Boy” Cali was gunned down on an early March morning in New York City. Cali was seen as the “American ambassador” between the Gambino family and other Italian Cosa Nostra families.

During the initial investigation, police said the murder, allegedly committed by 24-year-old Anthony Comello, had no connection to organized crime or mafia rivalries. Instead, authorities believe Comello was upset Cali barred him from dating his niece.

The 1980s became a hotbed for Mafia activity, not only in New York but also in Italy during the second Mafia war, fought between the Inzerillo family and Totò Riina. The conflict drove the Inzerillos out of Palermo and to the United States.

The FBI and Italian police started looking closely at the ties between the Gambino and Inzerillo families in February 2008 as part of Operation “Old Bridge,” which saw 77 people arrested between New York and Palermo.