The FBI arrested Puerto Rico’s former Secretary of Education and Health Insurance Administration head on Wednesday as part of an investigation into the allocation of government contracts. 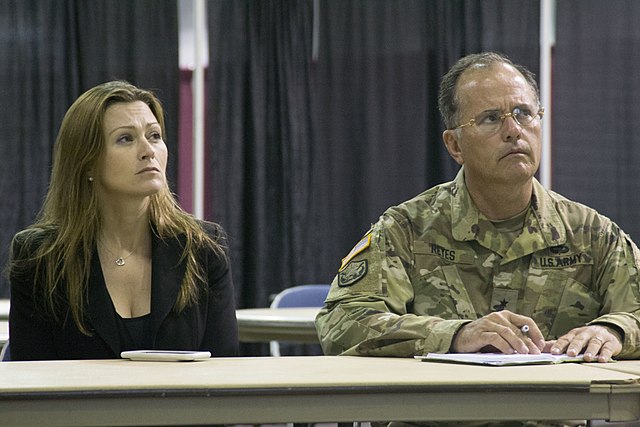 Former Puerto Rico Secretary of Education Julia Keleher (New Mexico National Guard)Julia Keleher, who resigned from the Department of Education in April, and Ángela Ávila-Marrero, who was part of the health insurance agency until her departure in June, allegedly doled out over US$15 million in contracts to close associates.

"Both Keleher and Avila-Marrero took advantage of their privileged positions as agency chiefs. They defrauded the U.S. and Puerto Rican governments," U.S. Attorney Rosa Emilia Rodríguez-Vélez said during a press conference.

The FBI also arrested three government consultants and an auditing executive as part of the investigation, filing a total of 32 charges against the six individuals, including money laundering, theft, and wire fraud.

The arrests come at an inopportune time for the island government, as congressional funding for relief efforts following a hurricane that killed nearly 3,000 people almost two years ago is currently pending.

Puerto Rican governor Ricardo Rosselló was asked to resign by Arizona Representative Raúl Grijalva, who oversees the Natural Resources Committee. Rosselló was on vacation in Europe when the arrests occurred, and has since booked a flight home.

"The Puerto Rican people deserve a government that takes public service seriously, that's transparent and accountable, and that doesn't let this happen in the first place," Grijalva said in a statement.

Puerto Rico has seen an increase in privatization and private-public partnerships as the government defaulted in 2015 and the economy slid into a recession, especially in the wake of deadly hurricanes like Maria.