UN: Organized Crime Accounts for a Fifth of Murders Worldwide 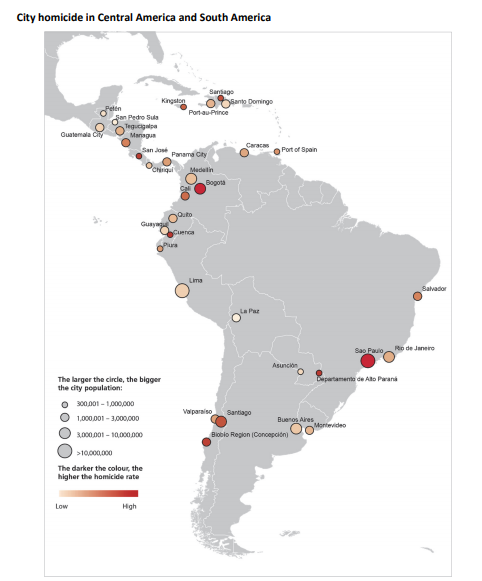 Homicide Rates in Central and South America (Source: UNODC)The UN Office on Drugs and Crime (UNODC) found roughly 464,000 people were murdered in 2017 while 89,000 were killed in armed conflict the same year.

“Since the start of the twenty-first century, organized crime killed about as many people as all armed conflicts across the world combined,” according to the report.

The Americas had the highest rate of homicides in 2017 compared to the global average, even though deaths because of homicide are dropping in cities across the region.

The UNODC says spikes in homicide rates can be related to shifting power dynamics between organized crime groups, like when a large flow of an illegal substance creates competition between groups. Identity and rivalry can also be a cause for gang-related murders.

Recently, large amounts of cocaine flowed into parts of Brazil, Mexico and Honduras, causing a spike in homicides.

But gangs and organized crime groups involved in drug trafficking don’t always contribute to higher homicide rates because they are “well-organized." The Netherlands, which has a high amount of drug trafficking, has a low rate of homicides, according to the report.

The African region had the second highest rate of murders globally but the UN states that reporting mechanisms for determining who committed the murder, and why, need improvement. They made the same recommendation for parts of Asia.

The UNODC recommends investing in rule of law and education to drive down homicides rates worldwide. Part of successful investment, according to the group, is access to rehabilitation programs for inmates, so that upon release they can become contributing members of society.