New Moldovan Prime Minister Determined to “Muck Out the State”

Less than a month after the government of Moldovan Prime Minister Vladimir Plahotniuc resigned, allowing a new coalition to take power, the country’s new Premier Maia Sandu said her first task is to “muck out the state.” 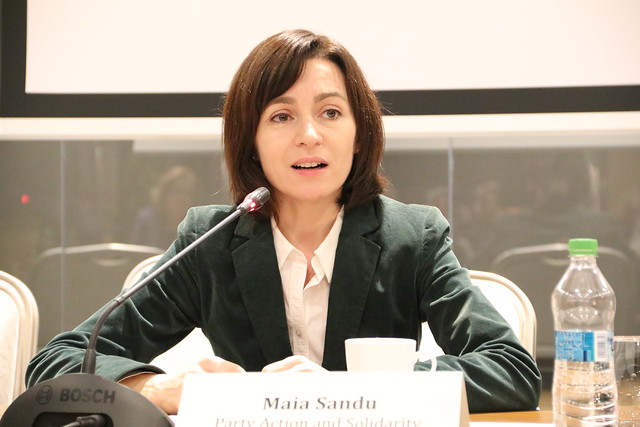 Maia Sandu, Moldovan Prime Minister (Photo: OSCE Parliamentary Assembly (CC BY-SA 2.0))“We are in the process of liberating this captured state. The servants of the Plahotniuc regime are leaving, one after the other,” Sandu said in an interview with Deutsche Welle, published on Tuesday.

Sandu also commented on recent allegations of bribery among more than 100 Customs and Interior Ministry officials during Plahotniuc’s regime, stressing that she is not surprised.

“For instance, there are state-owned companies which until recently financed Plahotniuc's businesses,” said Sandu. She is, however, afraid the cleanup process will not be easy with “a compromised law enforcement system.”

Some “dusting” has already started in Chisinau as Moldovan law enforcement has seized on Tuesday several properties registered with Finpar Invest Ltd., considered, as OCCRP partner RISE Moldova reported, “a core company of the real estate empire” of Vlad Plahotniuc.

According to the report, authorities seized studios of Plahotniuc’s TV station Publika and the boutique hotel Nobil in downtown Chisinau, a place where, allegedly, many of his enemies and partners have been recorded in compromising situations.

The seized property is estimated at US$5.57 million.

Finpar Invest Ltd. is controlled by Cyprus-registered Asirapal Enterprises Ltd., which is not a surprise, as RISE earlier spotted Plahotniuc’s properties evaluated at US$33.88 million and owned indirectly by entities in Switzerland and Romania.

Plahotniuc, the report said, earlier admitted in his wealth statement that he owns two Moldovan companies, as well as stakes in two foreign companies - in Abu Dhabi and Samoa.

It remains unclear, however, who ordered the operation at the TV station and the boutique hotel.

The law enforcement agency, as media reported, admitted its cooperation with prosecutors, but refused to reveal specifics about the case.