Colombian investigators on Friday ordered the protection of 11 soldiers who testified against former General Mario Montoya and former Colonel Hernan Mejia who are accused of killing civilians after having dressed them as rebel fighters, according to Colombia Reports. 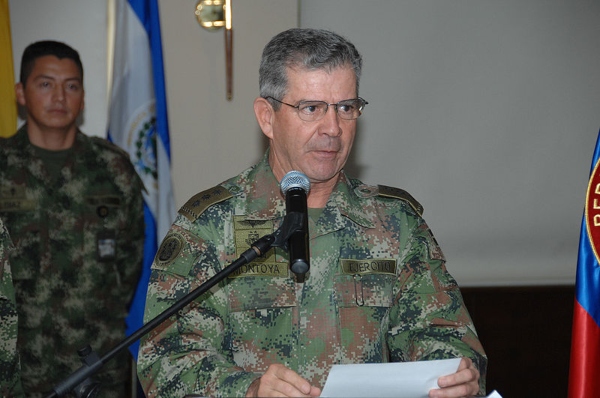 (General Mario Montoya who is accused of war crimes in Colombia: Jose Saez)The Special Jurisdiction for Peace (JEP), a commission that investigates and prosecutes war crimes committed by the Colombian National Army and the rebel group FARC between 1985-2016, issued the order after credible threats were made against the soldiers and their families.

“I don’t know when, but I know I’m going to die, honorable magistrates,” one soldier told the tribunal on Friday.

In an investigation published last week by Colombian magazine Semana, over 20 soldiers told the magazine they were called “rats” and were nearly killed for testifying against high-ranking military officials during the tribunal that started hearings in 2018.

Six of the men are in videos giving their testimony on “false positive” killings, which Montoya and Mejia have been convicted of orchestrating between 2002-2008.

Soldiers voluntarily reported their superior officers for war crimes and corruption to the JEP but have then been targeted for their action. One soldier survived an assassination attempt and another’s daughter was nearly kidnapped.

One told the Semana magazine that “while I was on duty, I was left anonymous letters at the door of my house in which they said that they were going to kill me and my whole family for being a rat.”

Journalists working on the story for Semana have also been targeted with letters and are being followed by people loyal to their superior officers.