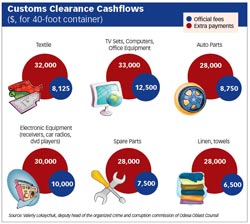 While importers are now forced to use the private Euroterminal to clear customs, bypassing the state-owned Odesa Sea Port, they admit that the new shadowy intermediary is better and cheaper than the old system of using high-cost customs brokers.

In 2011 and earlier, customs officials demanded cash payments to clear goods or importers could use a well-connected intermediary brokerage firms, commonly referred to as “the chosen ones,” according to Odesa lawmakers and local trade unions.

Importers who tried to go through the port could wait months for customs clearance.  Brokers, who were clearly connected to port management, were expensive. Both brokers and importers claimed that implementing that scheme wouldn’t be possible without the involvement of top officials from the Customs Service, whose job was to block the cargo of those who didn’t want to pay the privileged brokerages.

Ihor Kaletnyk, the former head of Ukraine’s Customs until Dec. 24, dismissed any allegation of corruption schemes at southern customs.

Two brokers that did the most clearances at the time were Odesa-based Vist and Vice Plus. Halyna Vdovina, the head of public counsel at Southern Customs service, confirmed these two firms were among the chosen ones.

Journalists for the Organized Crime and Corruption Reporting Project tried to contact representatives of these brokerage firms, but could no longer find them operating. Co-founder of Vist, Ihor Khotushenko, was murdered in November 2011, around the time of the changeover to using the Euroterminal.

Valeriy Lokaychuk of the Odesa local city council and member of the legislature’s organized crime commission, said the privileged companies were directly managed by high ranking political officials but that the system has been dismantled.

Lokaychuk displayed a tabulation of data, unofficially kept by customs officials who forced importers to use services of the selected brokers. Each type of good had two corresponding entries: customs duties paid to the budget and the unofficial cash payments collected by the chosen brokers.  For instance, clearance of a standard 40-foot container of computers or TV sets would cost Hr 100,000 ($12,500) in official duties plus a $33,000 cash payment to the broker to clear the goods.

“How much money do you think didn’t end up in the budget because of this?” Lokaychuk asks. “According to my estimates, more than Hr 20 billion ($2.5 billion).”

Tetyana Boychenko, who headed Southern Customs until December 2011 was never charged with any wrongdoing but her  successor as the top Odesa customs officer, Oleksandr Vdovychenko, didn’t last long after his appointment in January 2012. Ten months later, the Odesa prosecutor’s office raided the premises of Southern Customs, seizing a total of $870,000 in cash. The prosecutor’s press service statement specifically mentions that $22,000 was found in Vdovychenko ‘s office at Southern Customs.

On Oct. 20, Vdovychenko was dismissed from his post and is the subject of a bribery investigation involving two southern customs officials.

Yet, despite the cash found at his office, no charges against Vdovychenko have been lodged and he could not be reached for comment.