The First Family of Azerbaijan and a close business partner made a series of financial transactions in the days and weeks before a crippling 2015 devaluation of the national currency that eventually earned them at least 100 million manat (US$ 64 million) in just two deals while additionally protecting their banks and companies.

Meanwhile, the rest of the country’s banking sector lost more than one billion dollars from that devaluation and a later Central Bank decision to scrap the manat’s peg to the US dollar and let it float freely. The turmoil caused by the sharply falling manat would cause four banks to lose their licenses. Average Azerbaijanis were the real losers, as up to half of their life savings evaporated in a single year.

On Saturday, Feb. 21, 2015 the Central Bank of Azerbaijan depreciated the country’s currency - the manat - by one-third against the US dollar. The surprise move came after months of interventions by the Central Bank designed to prop up the manat and government promises that it would maintain the stability of its currency.

President Ilham Aliyev reassured the concerned public: “On the contrary, the manat is even stronger,” he told media as devaluation planning was underway. The Central Bank also promised, up to two days before the devaluation, that the currency would remain strong.

The transactions raise questions about what the president knew and whether he or anyone in his administration told his family and business partner of the impending devaluation and whether together they moved to protect their businesses and earn a profit from the crisis.

At the center of the controversy are three banks: Caspian Development Bank, AtaBank and Pasha Bank. The three are owned by either the Aliyev family; their business partner, Ashraf Kamilov; or both.

When the Central Bank switched to a floating rate for the national currency on Dec. 21, 2015, the manat lost value again, ending up at half its original value. In both devaluations, the president’s family and Kamilov won.

Ashraf Kamilov is a long-time close associate of the Aliyevs who once worked in in the Ministry of Taxes and the banking sector. He owns 99 percent of the shares in Synergy Group, a conglomerate that includes banks, hotels, agricultural and internet technology companies.

Prior to 2015, the Kauther Bank (Kovsar Bank in Azerbaijani) was a small, single-branch bank in Azerbaijan owned by individual shareholders, which reported little or no activity for the two previous years.

Then, in the last week of December of 2014, just before a year-end deadline, the bank was taken over by the Synergy Group, which more than tripled its capital to meet the minimum capital requirement of 50 million manat (about US$ 64 million). On Jan. 26, 2015, the Central Bank re-issued the bank’s license, approving a name change to Caspian Development Bank.

Three days later, the bank lent most of its money – US$ 52 million (40.7 million manat) – to SOCAR, the state-owned Azerbaijani oil and gas giant, as a US dollar denominated loan.

The loan was puzzling:

It is not clear why oil giant SOCAR needed a high-interest loan or why it would choose to do business with such a small, historically inactive bank. At the time of the loan, SOCAR listed “cash and cash equivalents” worth 1.5 billion manat (US$ 1.8 billion at that time), of which more than US$ 1 billion was in US dollars.

Then, three weeks later, the Central Bank devalued the manat.

The result was the Caspian Development Bank went from no earnings to a profit of 13 million manat (US$ 12.5 million) from a single deal.

After the second devaluation at the end of 2015 when the currency was floated, the earnings from that single loan tripled to 39.2 million manat (US$ 25.4 million). The SOCAR loan protected the bank and allowed it to make an end-of-year profit in 2015 of 8 million manat (US$ 5.1 million) rather than a loss like many other banks.

Two days before the first 2015 devaluation, AtaBank made a quick $20 million on a currency swap. (OCCRP photo)

Kamilov is also the senior vice chairman of AtaHolding, one of the largest conglomerates in Azerbaijan, which is ultimately owned by the Aliyev family. According to a 2013 AtaHolding annual report, the president’s son Heydar Aliyev, then just 16, had ultimate ownership of the bank. His sisters Leyla and Arzu Aliyeva are directors of a Panamanian company that is the majority shareholder.

AtaHolding and Kamilov are majority owners of AtaBank, the country’s ninth largest bank, owning more than 90 percent of the shares as of Dec. 31, 2014.

Kamilov’s company Synergy is deeply connected to AtaBank in two ways: as one of its largest customers and as a business partner.

In 2014, Synergy’s total funding of 139 million manat (about US$ 177.5 million at that time) consisted of loans from AtaBank, representing a third of AtaBank’s total loans.

Synergy, however, is not a normal company. The group owes much more than it owns and doesn’t make enough money to pay off its debts, making it unclear how the company can operate. According to the auditor, these loans were secured by deposits of Synergy’s owners—essentially, Kamilov.

The loans however, appear to be under-secured, posing a risk for the bank because Kamilov doesn’t have enough money deposited in the bank. The AtaBank report from 2014 lists shareholder deposits from related parties (including Kamilov) as under 31 million manat (about US$ 39.5 million)—far less than the loan amount. 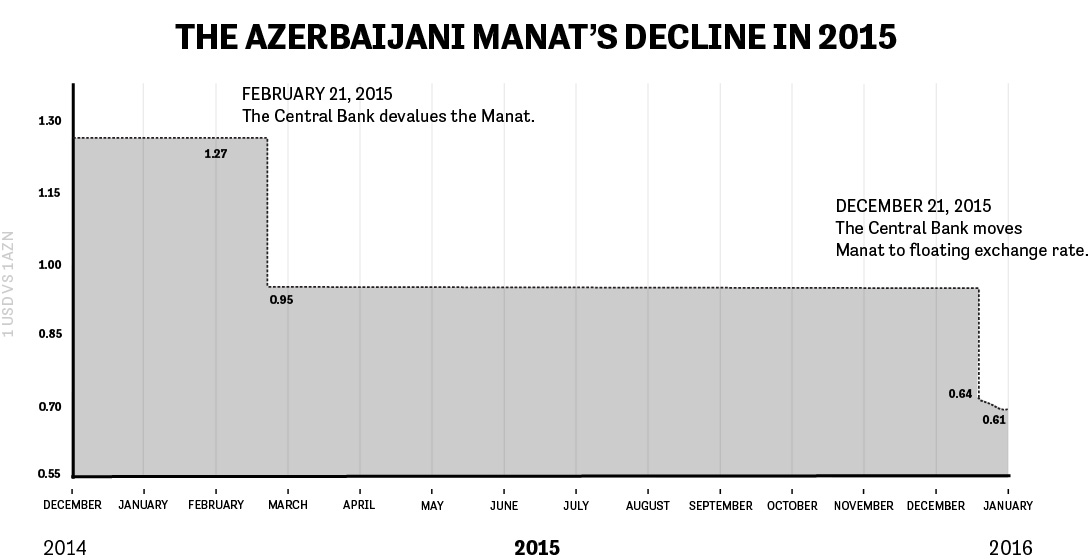 On Feb. 19, 2015, two days before the first devaluation, AAC LLC, a Synergy Group construction materials company, restructured the loan it got the previous year from AtaBank in an unusual way: it paid back 60 million in manat (US$ 76.5 million), and immediately re-borrowed a slightly higher amount in US dollars.

The deal was a boon to AAC, which two days later gained about 20 million manat (US$ 19.3 million) from the devaluation. The risky trade was out of character because the company said in its annual report that it had no exposure to currency losses or gains because “all the Group’s sales are domestic and denominated in AZN.”

The deal also helped AtaBank. As a result of the dollar loans and the devaluations, AtaBank earned 61 million manat (US$ 39 million), double the amount of the original loan.

AtaBank doubled in size from 2013 to 2014 in both deposits and loans, but according to its own audit report, the bank violated a number of regulations including key rules designed to keep a bank from being overexposed to one client, especially if that client is related to the management and ownership of the bank.

Information about Synergy will probably be more difficult to obtain in the future. Early in 2016, Synergy announced it would convert from an open joint stock company (OJSC) to a limited liability corporation (LLC). Once it leaves the Azerbaijani stock exchange, Synergy will have no obligation to report financial information to the public.

In a 15-month period, Pasha Bank made $39 million in what it called 'foreign exchanges and movements.' (OCCRP photo)

Pasha Bank is another bank owned by the First Family of Azerbaijan through Pasha Holding and was founded in 2007 by the family of Mehriban Aliyev, the wife of Ilham Aliyev. It is now beneficially owned by daughters Arzu and Leyla, according to the bank’s report.

The bank profited handsomely from currency exchanges, but because it did not report any transactions, it is not clear how the profits were made. The bank did double its foreign currency deposits between 2014 and 2015. The bank earned 35.9 million manat (about US$ 28 million) for 2015 in what it listed as “foreign exchanges and movements,” an almost six-fold increase from the previous year.

Pasha Bank also made one loan in 2014 “to a single borrower or group of connected borrowers” for more than 20 percent of the bank’s total capital, which again violates Central Bank regulations. Pasha Bank submitted a future action plan to be in compliance that was accepted by the Central Bank. 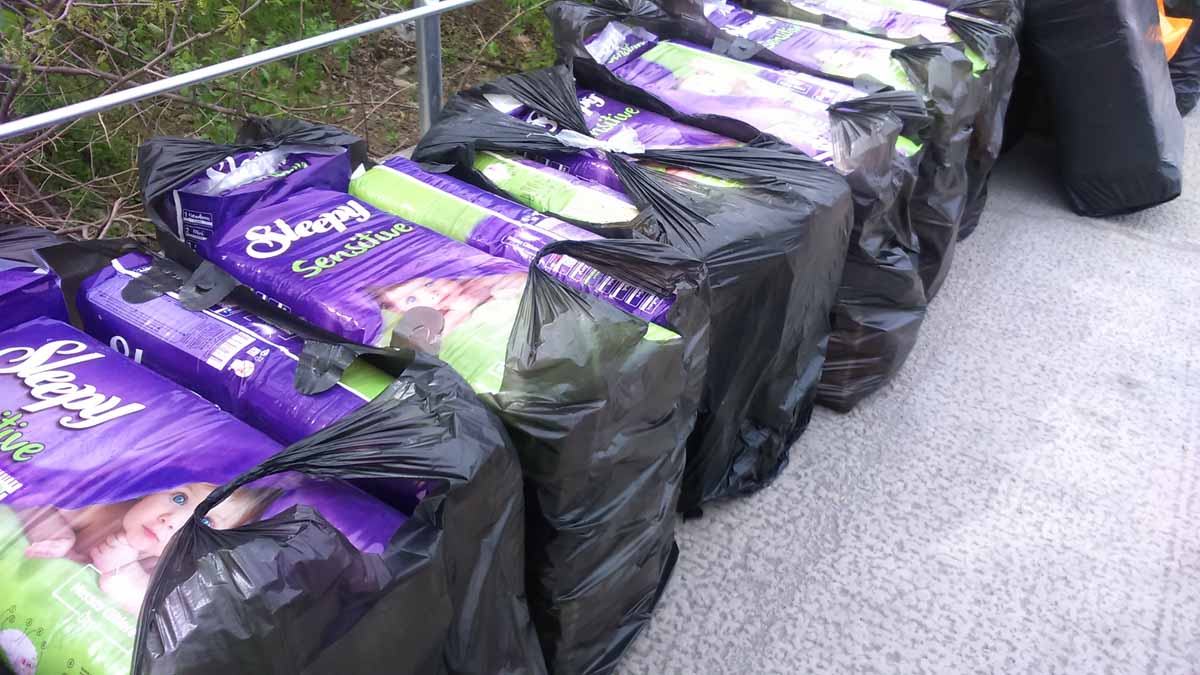 While some Azerbaijan banks profited, its citizens lost over 50 percent of their purchasing power. At the Azerbaijan-Georgia border, there is an increase in women trying to make a little extra money by buying consumer goods like diapers and hand-carrying them back into Azerbaijan.
Credit: OCCRP photos

At least four banks closed and two banks merged in the devaluation crisis largely because the banks could not meet the Central Bank’s 50 million manat minimum capital requirements. Many of the banks lost money that year as clients paid more money for foreign goods and customers bought less goods due to the weak manat. Loans went bad and the banks had to report more impaired loans. Losses and bad loans had to be subtracted from the bank’s capital leaving banks too weak to operate. Ordinary citizens of Azerbaijan were caught unaware of the impending devaluation and many lost half of their life savings in the two 2015 devaluations.

While the manat lost about half of its value against the US dollar, the situation is exacerbated by inflation which is currently running between 10 and 12 percent according to the Ministry of Finance, which means foreign goods cost even more and the manat loses more value. In 2015, the average monthly wage for 1.5 million working-class people was 296 manat (about US$ 197).

The government also created a new watchdog called the Financial Market Supervisory Board taking away some regulatory responsibilities of the Central Bank of Azerbaijan.

The new board, created under an executive order signed by President Aliyev, has the power to regulate the securities market, investment funds, insurance, and credit giving organizations including banks among other tasks.

Rufat Abbasov, advisor to the board chairman of the Financial Market Supervisory Board, said the board could not comment on government decisions that were made before the board was created early in 2016.

When asked if it was possible that the owners of the banks who profited from devaluation were informed in advance, Abbasov replied: “It is not our mandate to comment on speculations.

“According to the Constitution, a market economy is established, and unlike a socialist economy, profiteering is not considered a crime. Either before or after devaluation, any bank has the authority to be involved in currency exchange operations. If you make clear what you mean by devaluation profiteering allegations, we can give you an official reaction from the board.”

The story was edited to include a late response from the Financial Market Supervisory Board.