Free speech is sometimes severely punished in Azerbaijan, a country where scores of journalists and activists are in jail because they dared to voice their discontent with the corruption and the theft of state resources by President Ilham Aliyev’s regime.

So it’s ironic that a property in London that may have been purchased by the Aliyevs with purloined billions overlooks the legendary Speakers’ Corner of Hyde Park, a place where open-air public speaking, debate and discussion of government are not only allowed but encouraged.

OCCRP, which combed through British company and property records, found yet another piece of the Aliyevs’ overseas real estate empire, a luxury mansion worth millions of dollars in the very heart of London.

Until September of last year, President Aliyev’s first-born daughter, Leyla Aliyeva, was one of the directors of a company that manages a posh building situated across the street from Hyde Park. 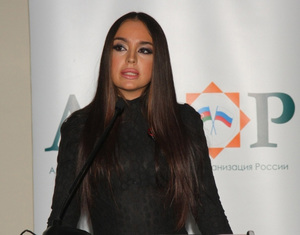 Aliyeva’s signature shows up in the company ownership records of 129-130 Park Lane Management Limited, the London firm that manages the five-story mansion next to Hyde Park. The building itself hosts six luxury apartments with a value ranging from $ 5.6 to $ 8 million. In all, the building is worth more than $ 33 million.

It’s not clear how many of the apartments in the building belong to members of the Azeri ruling family: all of the flats are registered to British Virgin Island (BVI) companies that all use the same address – a post office box.

A recent report by Transparency International UK titled “Corruption At Your Doorstep” found that 36,342 London properties totalling 2.25 square miles are held by companies based in offshore locales.

The research, analyzing data from the Land Registry and Metropolitan Police Proceeds of Corruption Unit, also found that 75 percent of properties whose owners are under investigation for corruption made use of offshore corporate secrecy to hide their identities.

The Aliyevs typically use their own names in records involving properties that they have owned for a long time. For some larger assets, they have used a few trusted proxies. More recently, they have taken to removing family names from the paper trail completely, possibly to avoid bad press or limit the risk of assets being seized or frozen.

Leyla’s place in the company was taken, in October 2014, by another prominent member of the ruling clan, her cousin, Mir Jamal Pashayev. He is the nephew of Arif Pashayev, Leyla Aliyeva’s maternal grandfather. OCCRP previously exposed Arif Pashayev’s secret real estate investments in the Czech Republic where he owns a hotel in the popular spa-town of Karlovy Vary.

Aliyeva became a director of the British real estate company in August 2008. She listed a Moscow address in the company formation paperwork, an apartment situated in a residential complex built by Aras Agalarov, her former father-in-law. Aliyeva announced on Instagram in May 2015 that she has divorced her husband Emin Agalarov, an Azeri singer and businessman.

Arif Pashayev shows as owner of Pasha Holding, one of the largest business conglomerates in Azerbaijan, involved in insurance, banking, travel, construction and investments. At the same time, his nephew, Mir Jamal, is the managing director of Pasha Holding.

However, Khadija Ismayilova, a journalist jailed by the Aliyev administration last December, found in a 2014 investigation that the First Daughters owned Pasha Holding.

The Aliyevs and the Pashayevs are the most powerful families in Azerbaijan and between them own a significant chunk of the economy of the oil-rich country on the shores of the Caspian.