Azerbaijan President Ilham Aliyev has spent billions on capturing the world’s attention to the European Games in his Caspian seaside capital of Baku. He has spared no expense, including slapping plastic facades on tired buildings, building new roads and booking megastar Lady Gaga for the Opening Ceremonies. The best hotels are booked solid. 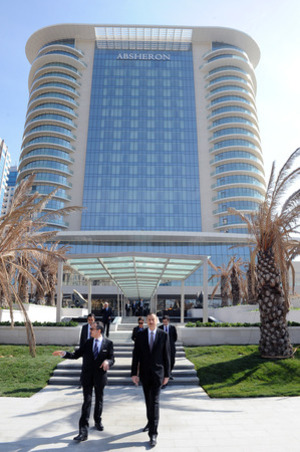 Ilham Aliyev, president of Azerbaijan attended the opening of the Marriott Hotel Absheron in Baku. (Photo by president.az)

In its two-week run, the first-ever competition played host to and showcased 6,000 athletes and 3,000 officials and support staff from 50 countries.

While taxpayers ultimately foot the bill for this, two privileged citizens have been massively enriched by the games: the president’s daughters.

That’s because they control an enormous chunk of the luxury hotel business in Baku. Their hotels, sporting such well-known Western brands as the Four Seasons, Sheraton and the Marriott, sit at key points in the city.

Reporters for the Organized Crime and Corruption Reporting Project (OCCRP) found that Leyla and Arzu Aliyeva directly own or are closely connected with six five-star hotels in Baku. One more hotel is under construction. They also own two exclusive mountain resorts, and likely have a role in a 10th hotel.

Reminiscent of the palaces of Arab princes, these hotels are known to most Azerbaijanis only through TV. They’re so expensive it would cost the average Azerbaijani a month’s salary to check in for a night or two.

As the games got underway, OCCRP checked on room availability. “Due to (the) European Games, our hotel is fully occupied,” said the receptionist at the Fairmont hotel, which stands like a gateway to Baku, overlooking the waters of the Caspian. Follow up calls to all Baku hotels connected to the daughters showed they too were booked solid through the closing ceremony.

Other First Family-connected or owned hotels, in addition to the Fairmont, are the JW Marriott Hotel Absheron Baku, a centerpiece of the futuristic skyline of the city center; the Four Seasons, a Beaux-Arts-style luxury hotel; and the Sheraton at Baku International Airport. The daughters also have holdings in Intourist, a boutique hotel described as the cradle of sophistication overlooking the waterfront boulevard; the Boulevard, the largest conference hotel on the Caspian; and two mountain resorts, the Pik Palace Shahdagh and the Park Chalet Shahdagh, surrounded by stunning mountain views of the Shahdagh, Azerbaijan’s most famous mountain. Another hotel under construction – the Dinamo – is described as a “heritage boutique” in the heart of Baku. It will open in 2016. 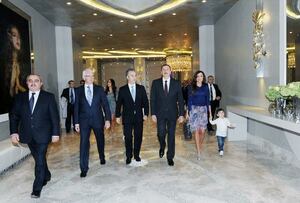 Ilham Aliyev, president of Azerbaijan and his wife Mehriban Aliyeva, attended the opening of the Jumeirah Bilgah Beach Hotel in Baku in December 2011.

A 10th, the Jumeirah Bilgah Beach Hotel, one of Baku’s most exclusive resorts, is connected to the daughters through related companies.

The nine working hotels are among the largest, best-situated and most popular hotels in Azerbaijan. According to a 2014 statement by the State Statistics Committee, Azerbaijan has 30 five-star hotels. Other major hotels in Baku are owned by business partners of the Aliyevs or government officials.

Six five-star resort hotels are owned by Ashaf Kamilov, chairman of the supervisory board of a conglomerate the First Family owns and a former tax ministry official. He is also a business partner owning one third of the family-owned ATA Bank. The Emergency Minister, owns six hotels.

The name-brand hotels all are less than 4 years old. The Four Seasons opened in 2012 just before the FIFA Under-17 Women’s World Cup in Baku; and the Marriott just before the Eurovision song contest in 2012. Intourist and Boulevard were opened just in time for the European Games.

President Aliyev attended almost all gala openings for these hotels. “Opening a new hotel always makes me happy because these are investments in our city and our country. It is the development of our city and (the) beautification of Baku,” he said at the 2013 opening of the Fairmont.

Prices for standard rooms in the family’s hotels start at an average 300 AZN (US$ 286). Some rooms cost as much as 1,500 AZN (US$ 1,430) per night. In contrast, the average monthly salary for most Azerbaijanis is 452 AZN (US$ 430). The First Family has 2,400 rooms and suites under its control. If they are fully booked during the European Games, the hotels could be bringing in more than US$ 10 million.

Ilham Aliyev attended the opening of the “Fairmont Baku Hotel” at the Flame Towers complex. (Photo by president.az)

Hotel Assets Worth US$ 10 Billion

An Azerbaijani real-estate expert who asked not to be named out of fear of retribution said that the high-end Baku hotels owned or closely connected to the family are valued at US$ 10 billion.

The Aliyevs came to own this profitable block of business through a web of intricate and hidden deals.

The Four Seasons and Marriot are held in the name of Pasha Holding, which was established in 2006 with investments in banking, insurance, construction, property development and tourism. Five more hotels – Intourist, Boulevard, the mountain resorts Pik Palace Shahdagh and the Park Chalet Shahdagh, and Dinamo (under construction) are owned in the name of Absheron Group, a subsidiary of Pasha Holding. 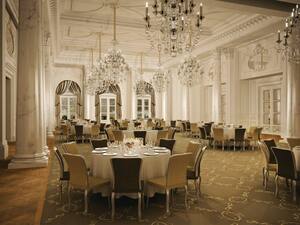 The Four Seasons hotel in Baku

Khadija Ismayilova, a journalist jailed by the Aliyev administration last December, found in a 2014 investigation that the First Daughters owned Pasha Holding.

Silkway Holding owns the Sheraton. A 2010 investigation by Radio Free Europe / Radio Liberty (RFERL) where Ismayilova worked showed that Silkway is owned by the president’s younger daughter, Arzu Aliyeva, and Zarifa Hamzayeva, the wife of the president of Azerbaijan’s AZAL state airline company.

It is impossible to identify the true owners of the two Azinkos due to legislation adopted in 2012 that made information about the founders of companies a commercial secret. This legislation was passed after Ismayilova’s reporting began revealing who owned Azerbaijani companies.

However, the family is linked to Azinko Development through their employee Hassan Gozel, the general director of Azinko.

According to leaked documents obtained by the International Consortium of Investigative Journalists, Gozel is director of Arzu Aliyeva’s company, Arbor Investments Limited, and Leyla Aliyeva’s Harvard Management Limited, which are both registered in British Virgin Islands. Others who have had similar positions in companies owned by the Aliyev family have been proxies acting on behalf of the family.

The similarly titled Azinko Holding Company is a Baku-based construction company. No names are associated with the company, but it follows the same pattern as Azinko Development. It was registered at the same time as Azinko and neither company show up at the registry at the Ministry of Taxes as is required by law. 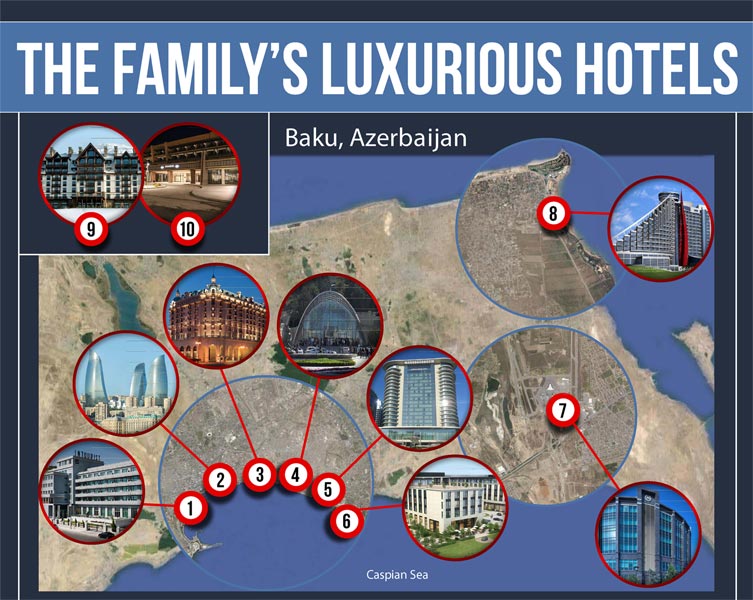 Controversy has accompanied the construction of at least five of the family-owned hotels.

The Four Seasons was built in a historic section of the capital despite the objections of architects worried about damage to the nation’s heritage. It was built on land taken from homeowners never paid fully for their losses. The hotel opened in September 2012, a few days before the FIFA U-17 Women’s World Cup. The first clients were international music stars Shakira and Rhianna.

The Marriott on Freedom Square – the place where Azerbaijanis gathered in the millions in the late 1980s to demand independence from the Soviet Union – used to belong to the Trade Union. It was secretly sold in 2006 to the Aliyevs’ Pasha Holding. Who bought the hotel, and for how much, has not previously been publicly disclosed. Hafiz Babali, a reporter for the Turan Information agency who at the time attempted to investigate the sale, said that the Trade Union told him it sold the hotel at a reduced price due to the union’s poor financial condition.

“At that time, nobody knew to whom and why for such a low price the hotel was sold. But now years later, we finally have an answer to the question of whom the hotel belongs to,” said Babali.

The Marriott opened just before the first notes of the Eurovision contest. 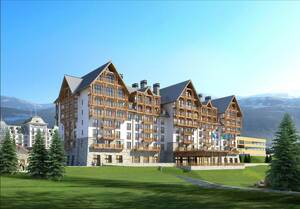 The same scenario played out with the Fairmont, known as the Moscow Hotel when the government owned it. In 2006 it was sold for 1 million AZN (US$ 1 million) to the family-connected Azinko, which was much less than it was worth, according to the Turan agency. It was demolished and replaced by the Flame Towers, now being marketed as the symbol of Baku.

Finally, the, Pik Palace Shahdagh and the Park Chalet Shahdagh were built on farmland where the people of Aladash and Quzan villages kept livestock. They were paid a pittance: 24 AZN (US$ 23) per plot. Eighty of them complained in court, but all their claims were rejected.

Their lawyer Anar Qasimli told RFERL he gave the court recent sales contracts which showed that similar real estate sold for between 1,000 and 2,000 AZN.

Gorkhmaz Asgarov, vice president of Azerbaijani-Americans for Democracy (AZAD), a non-governmental organization founded by Azerbaijanis living in the US, says that Aliyev runs Azerbaijan like his personal property.

“He has even inherited the presidency from his father. If we dig deeper we will see that Azerbaijan has tasted democracy for a very short period of time and its democracy ended with failure. Therefore, in Azerbaijan, society is sort of used to its property being robbed,” said Asgarov.

“Not so long ago in history, in Soviet times everybody knew that sturgeon and caviar in reality didn’t belong to (the Azerbaijani people). It is the same situation now. Before, the Soviet/Russian Empire plundered these resources via its chiefs on the ground, and now Ilham Aliyev is doing the same thing.”

The recent games are not the only events promising to help again fill the First Family hotels. Upcoming events include:

The UEFA European Championships 2020 will be played at the Olympic Stadium for three group stage football matches and a quarter-final match.