How Azerbaijan Manipulates Public Opinion in the US

To see how foreign interests distort reality to steer political debate and influence American foreign policy, look no further than a Dec. 5, 2012, meeting in the US Congress chaired by then-Rep. Dan Burton, R-Indiana.

The meeting was of the House subcommittee on Europe and Eurasia, and the star witness was Brenda Shaffer, a Ph.D. specialist on the Caucasus and former research director of Harvard’s Caspian Studies Program. 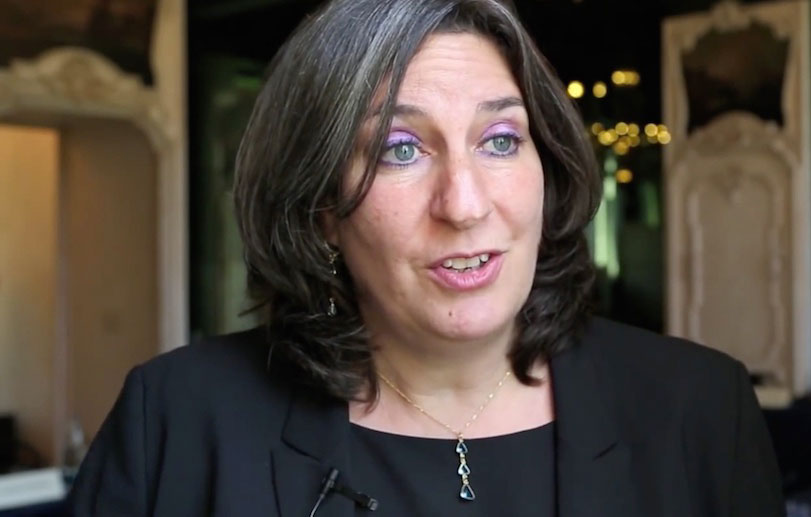 Burton introduced her as “the prettiest gal at the table.” And she, in turn, proceeded to warn assembled lawmakers that Iran was destabilizing pro-Western countries in that region, particularly its small but oil-rich neighbor, Azerbaijan.

But Burton and Shaffer both had ties to Azerbaijan they did not tell the committee about.

Shortly after this hearing was held, Burton resigned from the House and started a new job as chairman of the board of the Azerbaijan America Alliance, a lobby group promoting closer ties between the countries and apparently funded by a family close to the president of Azerbaijan.

Shaffer continued to praise Azerbaijan in other Congressional appearances, in numerous editorials and news articles, and in work with US think tanks.

Documents filed with the Department of Justice under the Foreign Agents Registration Act (FARA) less than two months before her 2012 testimony show that The DCI Group, a lobbying firm then under contract with Azerbaijan’s embassy in Washington, briefed her before her committee appearance. The firm is noted for pushing out its clients’ messages via seemingly neutral and independent third parties in a quest to “dominate the entire intellectual environment in which officials make policy decisions”. 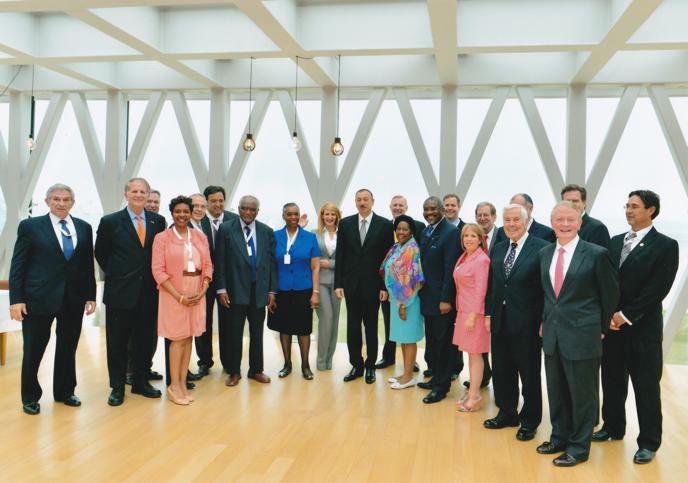 Members of a Congressional delegation to Baku in May 2013, pictured with Azerbaijani president Ilham Aliyev. (AFAZ website).

This more subtle approach to influencing lawmakers builds on more traditional methods, such as the all-expense-paid trip to Baku in 2013 for 10 members of Congress and 32 staff members revealed by the Washington Post.

But the goal is the same: DCI specifically identifies legislators as a target group for “informational materials” about Azerbaijan in its Foreign Agents filings.

The DCI Group’s contract with the embassy spelled out how for US$ 20,000 a month it could craft and place op-eds in major online and traditional news outlets, develop a core group of think tanks for outreach, and “define new topics for positive engagement that parallel Azerbaijan’s strategic goals”.

Shaffer’s Ties with Azerbaijan and Israel

DCI officials and Shaffer both declined to comment for this story about their interactions, including whether Shaffer got paid for her testimony or is being paid still.

But under the heading of “activities to influence U.S. policies on behalf of the Embassy of the Republic of Azerbaijan”, DCI Group reported the following interactions with Shaffer:

“Description: Email to Dr. Brenda Shaffer, Ph.D., Senior Lecturer, University of Haifa and Georgetown University on October 10, 2012, regarding a white paper examining Iran’s footprint in the South Caucasus and its ties to Armenia and the importance of Azerbaijan. Met with her on December 5, 2012, to introduce her to media. Also held meeting with her on February 5, 2013, to discuss possible future writings on Azerbaijan issues.”

Shaffer did write on that topic; the written statement she submitted to Burton’s subcommittee was entitled: “Iranian Influence in the South Caucasus and the Surrounding Region”. At the bottom, she portrayed herself as an independent academic scholar. And in a Congressional “Truth in Testimony” disclosure form she submitted before testifying, Shaffer left blank the field “Organization or organizations you are representing”.

Still, on the same day of her testimony, the DCI Group reported meeting her “to introduce her to the media”.

Aside from DCI, records show that Shaffer has worked as an advisor to SOCAR, the state-owned State Oil Company of Azerbaijan. 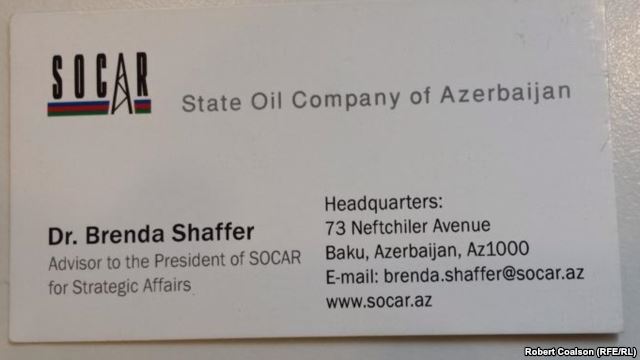 A business card identifying Brenda Shaffer as an adviser to SOCAR.

Neither Shaffer nor SOCAR responded to emails asking for details on their relationship, including the start date of her contract. She did not reveal anything of her deal to the congressmen she addressed.

Her work for the notoriously corrupt company closely tied to Azerbaijan’s regime became public knowledge when the media obtained a copy of her SOCAR business card, and broke the story in September 2014.

Shaffer has also advised Israeli government bodies, including its committee on natural gas policy. She also belongs to the Steering Committee that oversees the master plan of Israel’s energy sector.

Azerbaijan’s and Israel’s interests are so strongly aligned on many issues that diplomats from the two nations recently conducted a joint lobbying tour of Jewish communities in the US. During that tour, the Israeli ambassador to Baku, echoing a standard theme of pro-Baku lobbyists, praised Azerbaijan as a model of tolerance because its government does not persecute its small Jewish minority.

Shaffer also was silent about her SOCAR ties last July when she testified before the US Senate Committee on Foreign Relations, and gave a written statement urging support for a natural gas pipeline project in Azerbaijan. She said this project would thwart Moscow, improve the security of Europe’s energy supply, and provide tens of thousands of jobs.

The prime purpose of the Congressional “Truth in Testimony” form is to disclose federal grants and contracts rather than broader conflicts of interest, so Shaffer’s omission of her outside interests probably won’t have legal consequences.

Moves to close this loophole for lobbyists have had limited success.

Rep. Jackie Speier, D-CA recently proposed a rule requiring some Congressional witnesses to disclose funding from foreign governments. “The American people have a reasonable expectation that these links will be transparent and allow for the appearance of a conflict of interest to be aired publicly,” she told a House Rules subcommittee.

In early January, the House adopted Speier’s suggestions, but they are unclear and untested. Under the new rules Shaffer would have to disclose SOCAR money if she was testifying in “nongovernmental capacity,” that is as representative of a think tank or an NGO. But if she testified as a university professor, probably not. As another complication, SOCAR is a state-owned enterprise, not a government per se.

To really close the loopholes, Bill Allison, editorial director of the Sunlight Foundation, suggests that witnesses be required to list “all sources of earned income of more than, say, $10,000 over the last two years”.

FARA, the Foreign Agents Registration Act that bans lobbying for foreign clients without officially registering as their agent, also can be gotten around easily. Shaffer has not registered under FARA, but SOCAR has nine other Azerbaijani players, including Anar Mammadov, an oligarch closely tied to the IIham Aliyev’s regime.

Allison, asked whether Shaffer might have violated FARA, said “[T]here isn’t enough information to say either way. It depends on what she is doing as an adviser to SOCAR.

“If she’s in any way facilitating meetings between SOCAR employees and U.S. government officials, if she’s writing articles that advance SOCAR’s interests, then she should register with FARA. If she’s just recommending restaurants in Georgetown… That said, the fact that she’s testifying before Congress and no doubt has had many other contacts with congressional staff (you don’t just show up at a hearing), and that she’s paid by SOCAR, either she or SOCAR (since they are registered and are paying her) should disclose her contacts with those officials. But whether she has to under the law is difficult to say.”

Experts have long noted that FARA is riddled with ambiguities and loopholes. For example, the powerful Armenian lobby flies completely under the FARA radar. Once described by an insider as the third most effective foreign lobby in D.C., it is largely financed by American citizens of Armenian descent, but routinely promotes what it sees as the national interests of Armenia. Not a single entity seems to have filed a return under FARA to report lobbying on Armenia’s behalf. Similarly, the American Israel Public Affairs Committee (AIPAC), arguably the most powerful foreign policy lobby group in D.C., does not file FARA returns despite calls on the Department of Justice to compel it to do so.

A recent letter from Rep. Frank R. Wolf, R-Virginia, called on the Justice Department to review its enforcement of FARA this year and to consider possible changes.

Think tanks have assumed an important role in Azerbaijan’s lobbying strategy along with lawmakers and editorials. Azerbaijan has long been one of the top foreign spenders on lobbying in D.C., with some of that money flowing directly into think tanks.

Lobbying and idea laundering are slow and gradual processes, political observers say. Both are intended to change minds and open thinking to new ideas – those of the lobbyist, of course. Yet it is impossible to measure exactly the effect of any isolated lobbying effort such as Shaffer’s or the DCI Group.